The Nigerian Bar Association has (NBA) debunked the news that the Chairman of the Electoral Committee of the NBA (ECNBA)Professor Auwalu Yadudu has resigned, stating that the report was not only built on falsehood but constitute an act of forgery.

In a press statement dated 6th August, 2018  the General Secretary of NBA Mr Isiaka Olagunju stated that the rumour is unfounded.

” The attention of the Nigerian Bar Association has been drawn to an online media report by the ‘TheNigeriaLawyer’ on 6th August, 2018, that the Chairman of the Electoral Committee of the NBA (ECNBA) Professor Auwalu Yadudu has resigned.

“The official letterhead of the NBA and the Signature of the Chairman of the ECNBA were forged in that publication. The entire content of the publication is false.

“The NBA will ensure that this publication that is perpetrated to disrupt the ongoing electoral process to the extent of forging the NBA official letterhead and signature of the Chairman of ECNBA are investigated.” 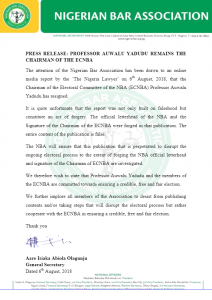 University Degree Should be Minimum Qualification for President – Adegboruwa