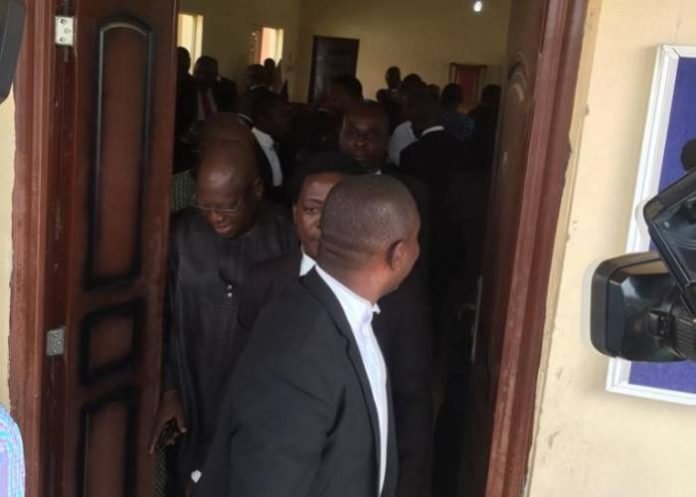 The Ekiti Governorship Election Tribunal sitting in Abuja has dismissed an application by Peoples Democratic Party (PDP) for the recount of ballot papers used in the July 14 poll.

The PDP and its candidate, Prof. Olusola Kolapo are challenging the outcome of the election in court.

The respondents in the matter are Independent National Electoral Commission (INEC), All Progressives Congress (APC) and Dr Kayode Fayemi, the winner of the election.

The chairman said PDP and its candidate did not complain about all the 2,197 polling units in the state.

“To pray for recount in all wards and polling units across the state is to make firm nonsense of the petitioners’ pleading,” Belgore said.

According to him, pleadings are written statements of parties in a procedure wherein they clearly state the materials, including documents, they will rely on in the proceeding.

He said the tribunal could only admit where it was supported by pleading, adding that what the petitioners wanted could not be situated in their pleading before the tribunal.

The chairman further said that the evidence so generated from the recount would have no basis in the proceeding.

He added that what the petitioners wanted to do was to spring a surprise on the respondents which they would not be able to respond to as time for pleading had closed.

He stated that the tribunal was in agreement with the submission of the counsel for Fayemi, Chief Akin Olujimi (SAN), that the petitioners were fishing for evidence under the guise of recounting the ballot.

The relief that seeks the recount be done in the presence of two representatives of the parties in the matter, secretary of the tribunal and security operatives, the tribunal held that involving its secretary would amount to the secretary giving evidence for the petitioners.

“The secretary of the tribunal cannot be a party to do what the application wanted,” Justice Belgore stated.

He, therefore, declared, “we hereby rule that the application is lacking in merit.”

In a related development, the tribunal turned down INEC’s application from excluding the smart card reader machines used in the July 14 governorship election.

Ruling on the application argued by Dr Onyechi Ikpeazu (SAN) for INEC, Belgore said that excluding the card readers from inspection would be tantamount to setting aside the tribunal’s early order granted on July 26.

The tribunal, however, made a consequential order that the inspection of the card readers must be completed by the end of each party’s case, which would commence on Oct. 17.

The chairman declared that the consequential order was not setting aside the exparte order granted on July 26.

The tribunal thereafter adjourned the commencement of hearing in the petition until Oct. 17.