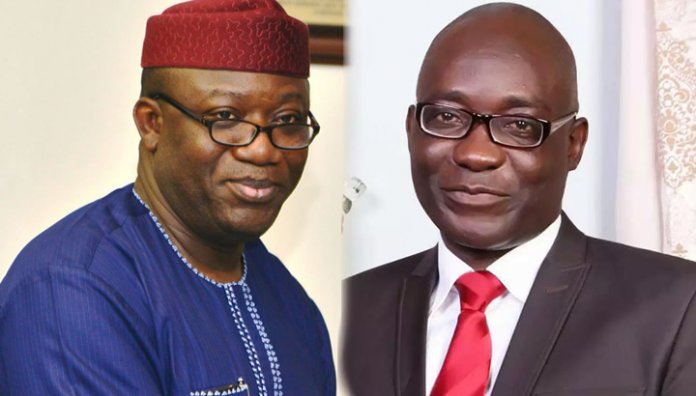 A witness for the petitioners at the Ekiti  Election Tribunal, sitting in Abuja, on Wednesday disowned one of the tendered exhibits.

The petitioners, the Peoples Democratic Party, and its candidate in the Ekiti July 14 governorship election, Prof. Olusola Kolapo had approached the tribunal to challenge the outcome of the election.

The respondents in the suit are the All Progressives Congress, Governor Kayode Fayemi and the Independent National Electoral Commission.

The witness, Aborisade Abolarin, who served as a polling unit agent for the People’s Democratic Party in the July 14  election, stated this while being cross-examined by the counsel for the Independent National Electoral Commission, Chief Charles Uwensuyi-Edosomwan (SAN).

Asked if his signature was the one on the Form for Polling Unit 005, Ward 9, Moba Local Government Area of the state, the witness stated that it was not his signature.

“It is not my signature that is here (on the document).  I disown this document,” said the witness listed as PW26.

Also a former councillor in Ikere LGA, Adeniyi Ibidunmoye, stated under cross-examination that he was a polling agent for the petitioners during the election.

According to Ibidunmoye, who said he served as a councillor between 2008 and 2010, after counting of votes, PDP scored 219 votes as against the APC’s 115, adding that some ballot papers cast for PDP were voided.

He stated that an argument ensued following the voiding of his party’s votes, adding that he only signed the result sheet after the argument.

Another witness, Adeyemi Idowu from Moba LGA, informed the tribunal under cross-examination that, a total of 21 votes were voided at the Polling Unit 14 Ward 10, where he was a PDP agent.

Meanwhile, all the witnesses called by the petitioners complained in their written witness statements on oath of alleged deliberate voiding of valid votes meant for the petitioners during the election.

The tribunal chaired by Justice Suleiman Belgore, will continue the hearing of the petition on Thursday.