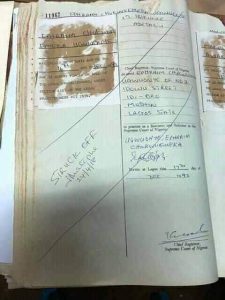 It would be recalled that sometime in May, 2017, the Legal Practitioners Disciplinary Committee (LPDC) recommended to the Chief Registrar of the Supreme Court of Nigeria to strike out Mr. Ugwuonye’s name from the roll. The recommendation followed a case in which he was accused of having failed to disclose his personal interest in a property he was briefed to obtain letters of Administration for, which involved a widow. 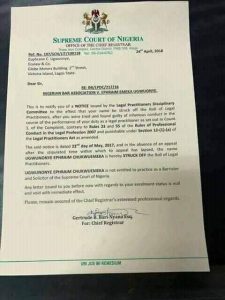 Following Mr. Ugwonye’s failure to appeal the finding of the LPDC within the stipulated time, the Registrar carried out the significant act of striking through his name on the register of legal practitioners.

Emeka Ugwuonye has in recent times been in the news for all the wrong reasons. He is reported to have opened a Facebook page “Due Process Advocates” where he claimed to be assisting the oppressed but is however reported to have used the platform to allegedly engage in the extortion of unsuspecting members of the public. Ugwuonye is also defending himself in court over his alleged involvement in the disappearance of one Mrs. Charity Aiyedogbon.

Ugwuonye is also said to have been reportedly banned from practicing law in the United States of America for professional conduct.