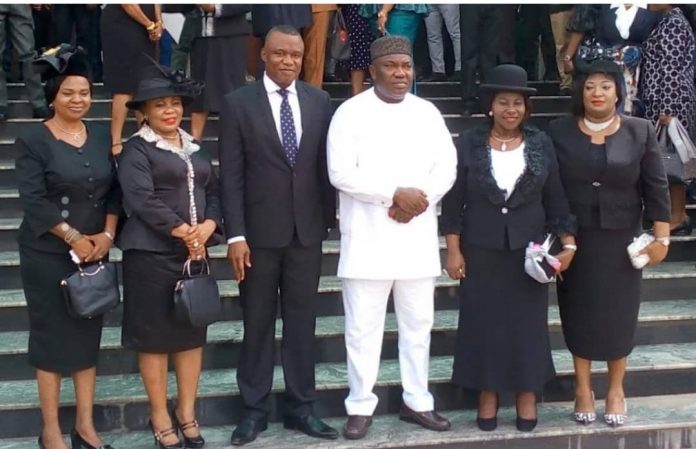 Hon. Justice Okibe until her elevation was the Chief Registrar of the High Court of Justice, Enugu, while Hon. Justices Ajogwu and Alukwu were Chief Magistrates (Grade 1) of the state’s Judiciary.

Swearing in the new Judges, Gov. Ugwuanyi said that the action was taken in response to the decision of the National Judicial Council (NJC) communicated to him through the Chief Justice of Nigeria and the Chairman of the Council, Hon. Mr. W.S.N. Onnoghen, which recommended three persons out of the eight candidates shortlisted by the Enugu State Judicial Service Commission, for appointment as High Court Judges in Enugu State.

While congratulating the new Judges on their deserved appointments, Gov. Ugwuanyi expressed confidence that they will approach their new responsibilities with due dignity, integrity and commitment.

Presenting the new Judges to the governor for swearing in, the Chief Judge of Enugu State, Hon. Justice Priscilla Emehelu in her address stated that the Jurists were appointed by the NJC after “a long and rigorous exercise” carried out by the Enugu State Judicial Service Commission in their nominations.

Hon. Justice Emehelu added that the Enugu State Judicial Service Commission in nominating the Judges for appointment considered several qualities in line with the provision of Rules 3 and 4 of the NJC Guidelines.

The Chief Judge disclosed that the considerations were “Sound knowledge of the law; seniority at the bar and bench; geographical spread; good character; reputation; consistent adherence to professional ethics, and satisfactory and consistent display of mature judgment in the office as a Chief Registrar or Chief Magistrate”.

She emphasized that consideration was also given to the Local Government Areas in the state that had no serving Hon. Judges, attesting that the three new Judges “have over the years gathered a lot of experience on the bench which they will bring to bear at the higher bench of the High Court”.

Hon. Justice Emehelu therefore thanked Gov. Ugwuanyi for his contribution towards the appointment of the Hon. Judges, saying: “Let me before presenting them to His Excellency for swearing in put on record that this event could not have been possible but for the provision of the facilities which are preconditions for appointment of Hon. Judges”.

According to her, “this is the first time in over twenty (20) years that furnished accommodations are provided for newly appointed Hon. Judges in Enugu State.

“We also thank him for his resolve to reposition the Judiciary of Enugu State for effective, efficient and quick dispensation of justice notwithstanding the paucity of funds and other competing sectors”.

Responding on behalf of the new Hon. Judges, Hon. Justice Okibe thanked Gov. Ugwuanyi, the state’s Chief Judge, the National Judicial Council (NUJ) and the state’s Judicial Service Commission, for the elevation and promised that they would discharge their duties creditably and with the fear of God.

Recruitment of Black and Asian Judges too Slow – Lord Chief...