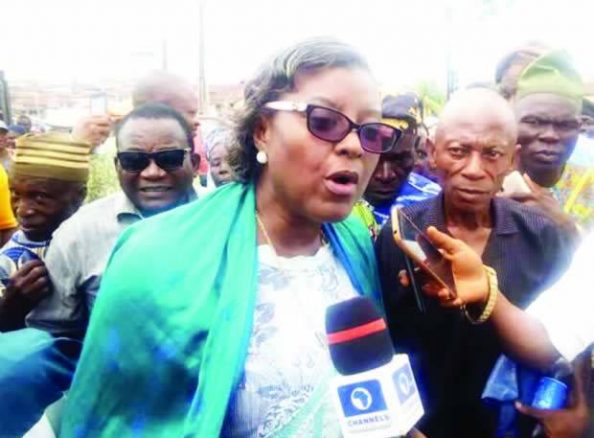 A retired judge of the Osun State High Court, Justice Folahanmi Oloyede, on Wednesday led hundreds of retirees in protest against the non-payment of their gratuities and pensions by Governor Rauf Aregbesola-led administration.

The protesters marched through some streets in Osogbo, the state capital, demanding the payment of the money owed them by the government.

The pensioners started a three-day protest on Tuesday and they gathered again on Wednesday in continuation of the agitation for payment of their entitlements, which they claimed the state government had not been paying.

Oloyede had written a petition against Aregbesola’s administration in 2015, detailing the alleged failure of the government in many areas, including non-payment of workers’ salaries and pensions.

She was eventually recommended for a compulsory retirement by the National Judicial Council.

The retired judge, who was helped at the Olaiya Junction into a mini truck used by the protesting pensioners as their platform, urged the retirees to bring their permanent voter cards while coming for the final day of the protest on Thursday (today).

Oloyede sang labour songs and urged the aged protesters not to be weary in the demand for their rights, saying they would all be alive to collect their entitlements.

The retired judge, in an interview with, said the primary duties of any responsible government were welfare of the citizens and their security.

She said any government that failed in the two areas had failed woefully in the discharge of its primary duties.

The retired judge said pensioners would be persistent in their struggle to ensure that their pensions and gratuities were paid.

She said, “Labourers deserve their wages and it is covetousness to spend what belongs to other people. It is a crime to spend pensions and gratuities of the people and deny them their rights. We are not beggars, we worked for the entitlements and the government saved this money for us while we were serving the state.”