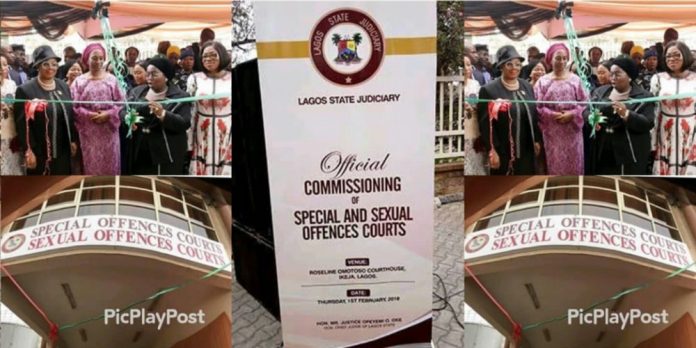 Lagos always likes to blaze the trail in everything that has to do with reforms, possibly because it is christened the ‘centre of excellence.’

Ensuring that it scores first in judicial reforms as directed by the Chief Judge of Nigeria (CJN), Justice Walter Onnoghen that all heads of courts in the country should create special courts for the speedy trial of corruption cases, the Lagos State Chief Judge, Justice Opeyemi Oke has commissioned four special courts.

In doing that, Justice Oke said it was in obedience to the directive given last year by the CJN that special courts would make the judiciary more efficient and to facilitate the determination of corruption and financial crimes cases timeously.

The division is tagged, “Special and Sexual Offences Courts”. The Chief judge said that it had become imperative in order to ensure speedy dispensation of justice in such matter.

According to her, Lagos judiciary believe strongly that the special court shall fast track those types of cases and encourage the Economic and Financial Crimes Commission (EFCC) and other relevant bodies like Independent Corrupt Practices and Other related Offences Commission (ICPC) to expedite the investigation and prosecution of such cases.

Her words: “I make bold to say that establishment of special court is a new approach used as a reform strategy to improve judicial performance.”

She said it was cheering that Nigeria was joining the league of other countries, such as Indonesia and Malaysia, which had since thought it wise to take drastic steps against financial crimes by creating specialised courts.

“Thus, the Special Offences Courts will exclusively handle corruption and financial crime cases and others, including cybercrime and other related offences.

“We have commenced a campaign against corruption in our courts and among supporting staff. All hands are on deck to see an end to these cankerworm that has eaten deeply into the fabric of our judiciary delivery system,” she said.

The CJ said there were no fewer than 500 financial crimes currently pending before the Lagos State High Court, most of which had now been transferred to the special courts for expeditious hearing.

“We must not relent in our determination to see an end to this societal malaise,” she said, adding that the court would attend to sexual and domestic violence cases, which had grown to alarming height in the country.

“Sexual assault has become so rampant in our society. It has spread like wild fire from home to school, to the work place, on the streets, everywhere. Children, young girls and boys and women are constantly at risk of being attacked including the vulnerable ones.

“Although there are legislative instruments in our law books to combat the menace of domestic and sexual violence, they are almost ineffective in curbing the rising tide of sexual assault. This is because many of the incidents are unreported by the victims nor do they seek redress for fear or reprisal or stigmatization. Thus many victims suffer in silence, traumatized and left to cope with emotional and psychological scars,” she declared.

Dignitaries present at the inauguration include the acting Chairman of the EFCC, Mr. Ibrahim Magu.

ALSO READ   All FWLR This Week: Disclosure Of Proper Parties To Action; Condition Precedent To Jurisdiction Of Court

Others who graced the occasion were the wife of the Vice-President, Mrs. Dolapo Osinbajo, and the Lagos First Lady, Mrs. Dolapo Ambode.

However, Ambode, in a speech delivered by Adebule said Lagos had keyed into the Federal Government’s drive to root out corruption, promising that the state “will assist in the expeditious prosecution of corruption cases.”

The governor described corruption as “a major challenge to the sustainable development in the state,” which must be fiercely combated.

The governor believes that the creation of the special courts would assist in expeditious prosecution of economic and financial crimes and ensures that justice is attained by bringing offenders to justice without delay.

Ambode noted that corruption constituted a major challenge to sustainable development of the country and has adversely affected the integrity, image and business confidence of prospective investors.

He said it is proper to classify Lagos, over 20 million population, as one of the most populous cities of the world “and indeed the economic and financial capital of Nigeria and by extension of West Africa.”

He said: “This naturally makes it the most susceptible to perpetrators of these crimes. This was why the courts are being designated special courts to focus primarily on effective prosecution of these cases given the volume of financial related cases handled in the state.

“I commended the CJN, Justice Onnoghen for this foresight and bold initiative, which is being implemented all over the country. In the same vein, Lagos State is in colaboration with the British Council under the Rule of Law Anti-Corruption programme to provide technical support in the fight against corruption, enhance good governance, strengthening the rule of law and reduction of impunity.

“The state collaborates with such agencies charged with investigation and prosecution of corruption offences, by providing enabling environment in terms of responding to inquiries and providing information to the EFCC and the ICPC toward assisting them in dispensing their statutory functions.”

He however pointed out that the goal to make Lagos State a safe place to live, visit and do business can further be achieved if these specialized courts operate as conceptualized.

Also, on behalf of the Lagos Attorney General, Odunlami congratulated the CJ, noting that is was a laudable event because as usual, Lagos has done something that others have not done.

The representative of appeal court president, Garba lauded the Lagos State Judiciary for yet again “blazing the trail” in implementing CJN’s directives.

Also speaking, the VP’s wife, Dolapo, said the courts “will make access to justice easier and faster for our people.”

The CJ, Dolapo, Adebule and Odunlami, in their separate speeches, lamented the rising cases of rape and domestic violence, while expressing their delight at the creation of special court to try the perpetrators.

Mrs Osinbajo lamented the level of corruption and sexual offences cases in courts, adding that the statistics quoted by the CJ is very frightening. 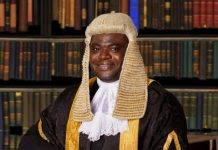