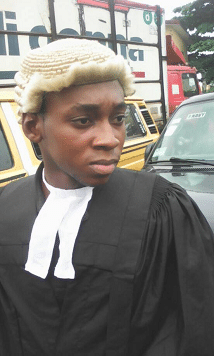 The police in Lagos have arrested a 27- year- old man Destiny Otubambo, for allegedly parading himself as a lawyer and buying exotic cars, phones and other valuables with false bank transfers.

The Commissioner of Police in Lagos, CP Imohimi Edgal confirmed the arrest to newsman on Monday at Ikeja, advising business owners to be wary of fake bank transfers.

According to Edgal, on May 12 the suspect allegedly approached a phone retailer  at Ikota Shopping Complex,  Lekki, Ajah Lagos.

“He introduced himself as Mr Adeleke, a legal practitioner and requested for a Techno Camon X-pro phone valued at N77,500. He claimed he was cashless and wished to pay through telephone transfer the total sum of N377,500.

“He was given the account details to which the said amount should be credited. After few minutes, he claimed he had credited the said sum.

“To prove he had, he showed a debit alert from Zenith account number 2110746005, titled, Destiny Ayo Adeleke.

“Believing it to be true, the shop owner released the phones to him and requested for his phone number. Unknown to her that it was a fake alert, the phone number was  unreachable and the account number non-existent,” he said.

Edgal said detectives from FSARS and the local police component, got hold of one Marian Amuche,  the girlfriend of the suspect whose pictures were downloaded from the suspect’s Instagram page.

“Exhibits recovered from him were two Techno phones, One I-phone, 10 SIM cards belonging to different networks, lawyers’ gowns and wigs.

“On interrogation, Destiny confessed to the crime and that he had sold the phones to buyers he met online,” the police further said.

Speaking on the sidelines of his parade to newsmen, the suspect claimed he was a student of American University but dropped out of school because there was no money to continue his education.

“I don’t go to court to represent anybody,  but I bought the gown and wig for N35,000 just to show off on my Instagram page that I am a lawyer. This is my fifth deal in defrauding people

“The first one was in Port Harcourt where I generated a false alert and bought a car for N5million.  But the seller  did not sense it was false”.

“I have  a false Zenith Bank account. I would falsify the original alert with the use of computer and make it look real,” he confessed.

Edgal said that investigation was ongoing with a view to understanding the suspect’s modus operandi and discovering other crimes he may have committed through various SIM cards recovered from him.

NBA to Sponsor 100 Young Lawyers to the 2017 Conference