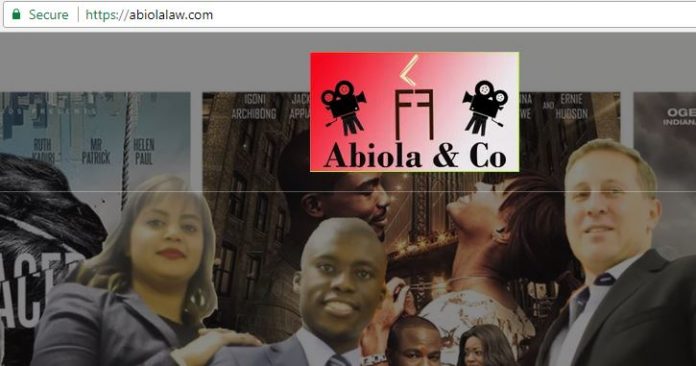 A fake Nigerian law firm invented by RollOnFriday has won two legal awards. RollOnFriday created a website, www.abiolalaw.com, for a fictional firm called FLF Abiola & Co. It claimed to specialise in film financing law and gave a false address on a real street in Enugu, where Nigeria’s ‘Nollywood’ film industry is based. ‘FLF’ stood for Fake Law Firm.

FLF Abiola & Co’s imaginary Managing Partner, Dennis Abiola, nominated it for ‘Film Financing Law Firm of the Year in Nigeria’ in contests which permitted nominees to invent their own category. To support his entry, Dennis submitted a list of genuine Nigerian films for which he claimed FLF Abiola & Co had structured funding.

Two legal awards companies, Corporate INTL and Finance Monthly, responded. Corporate INTL’s awards secretary emailed Dennis in December to confirm that FLF Abiola & Co had been shortlisted in the Corporate INTL 2018 Global Awards. He claimed that its “research department”  had “conducted extensive reviews” and had produced “a shortlist of candidates for your award category“.

Finance Monthly’s Award Manager sent a similar email informing Dennis that his firm was in the running for the Finance Monthly Law Awards 2018. He said that “only categories with a sufficient number of votes” were considered for shortlisting, which he claimed “involves examining and verifying all documentation and supporting text provided“. However, he warned, “although the shortlist has been finalised” the winners “have not yet been decided“.

Despite the fierce competition and rigorous checks, in January FLF Abiola & Co was crowned ‘Film Financing Law Firm of the Year in Nigeria – 2018’ by both Finance Monthly and Corporate INTL, even though it did not exist. At the same time as they congratulated Dennis, the companies attempted to sell him advertising space in their awards magazines. When Dennis asked Finance Monthly if they would include him for free the company stopped replying to his emails. However, when he expressed interest in Corporate INTL’s cheapest package, it requested the firm’s logo and his picture for publication. He was happy to provide them:

His submission was accepted and, smelling desperation, ‘Dennis’ haggled Corporate INTL down from £300 to £100 for the featured profile. Then his fake brother Joseph Abiola intervened and asked to pay in cash. When Corporate INTL agreed and told him to send the envelope to an address in Birmingham, he withdrew, expressing fears that Corporate INTL was not a legitimate operation.“I am deeply ashamed“, he emailed Corporate INTL. “One of our backers has forbidden the firm from paying for this service due to fears of illegitimacy…Sadly the UK has a reputation here in Nigeria for perpetrating sophisticated frauds on our citizens. Yours in Christ“. Corporate INTL’s awards manager replied, “I would ask you to simply Google ‘Corporate INTL Awards’ and you will literally see hundreds of professional advisory firms from around the world commemorating their success in our Awards. Your Managing Partner can surely distinguish our brand and legitimacy by simply doing a few minutes research on our business?”

When RollOnFriday disclosed the investigation to Corporate INTL this week, a spokesman said, “It’s disappointing that your organisation would go to this trouble to undermine confidence in our brand and to damage the integrity of the legal profession“. He said, “We will concede that there has been a breakdown in the due diligence/judging phase of our awards programme, however there are clearly mitigating circumstances and ultimately the award will have never been published. Even if FLF Abiola & Co did exist there would be no record anywhere of their winning this award“.

“Certain locations and practice areas are very difficult to source extensive information on, such as ‘Film Finance in Nigeria’…If a law firm puts themselves forward for an award and has what looks like a legitimate website, then they will be considered, why wouldn’t they be?” He said, “I’d advise you spend some of your time entrapping the real problem publishers and not companies like our own“.

Andrew Palmer, the director of Finance Monthly, did not respond to requests for comment. After the water taxi episode he told RollOnFriday, “Please refrain from ever contacting me, or any other person at Universal Media ever again“.