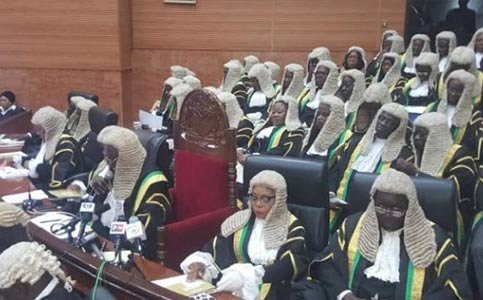 The Chief Judge of the Federal High Court, Justice Adamu Abdu-Kafarati, has barred judges of the court from granting ex parte orders in political cases.

He also said on Monday that he had given a deadline of October ending to judges to conclude political cases with likely effect on candidates in the forthcoming elections in the country.

Justice Abdu-Kafarati said these during the occasion of the special court session to mark the commencement of the Federal High Court’s new 2018/2019 legal year.

The Chief Judge noted that his directives on political cases were part of measures put in place to forestall any hiccup and the blame on the court by “political gladiators”.

Prohibiting judges from granting ex parte orders which are made without the knowledge or hearing of the other parties involved in a case, Justice Abdu-Kafarati said controversies that often surrounded political cases could be reduced if a court took a decision after hearing all the parties to the case.

He said, “In an attempt to forestall any hiccups and the blame on the court by the political gladiators, I have during this vacation issued a circular that interim orders ex parte shall not be granted in any political cases brought before the court.

“I believe that controversies, especially in political cases, can be reduced when the court takes a decision after hearing all the parties in the case.”

Issuing the October deadline to judges to conclude political cases, the Chief Judge said the directive was to afford candidates in various elections the opportunity to pursue their political ambitions.

The CJ said, “It is also extremely important that all political cases that may affect any of the parties which are still pending in any of our courts be concluded without further waste of time to afford all candidates the opportunity to pursue their political ambitions.

“Honourable judges before whom such cases are still pending must endeavour to conclude them before the end of October 2018.”