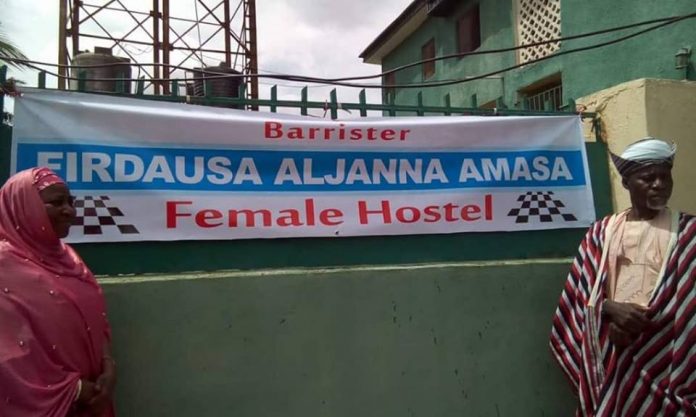 A female hostel in the Islamic Leadership Academy, Kuje, Abuja has been named after Miss Amasa Firdaus.

Declaring the hostel open, Hajiya Amina Abubakar Ameerah, the CEO of the Al-Ansar Orphanage Home, Abuja  said the commissioning was in fulfillment of a promise she made during the Grand Reception held in honour of Miss Firdaus’ call to bar by the Coalition of Muslim Groups at the National Mosque, Abuja recently.

Amasa Firdaus the law graduate of University of Ilorin became popular in December 2017 when she was denied access to the call to bar ceremony which took place at the International Conference Centre, Abuja, for refusing to remove her hijab. She had insisted that wearing the hijab does not contradict the dress code set by the law school, while describing the action as “a violation of her rights”.

In June 2018,  the body of benchers responsible for calling law graduates to bar, approved the use of hijab, and Firdaus was called to bar. She was quoted to have said that she was used as an instrument by God to break the Hijab Barrier among lawyers.