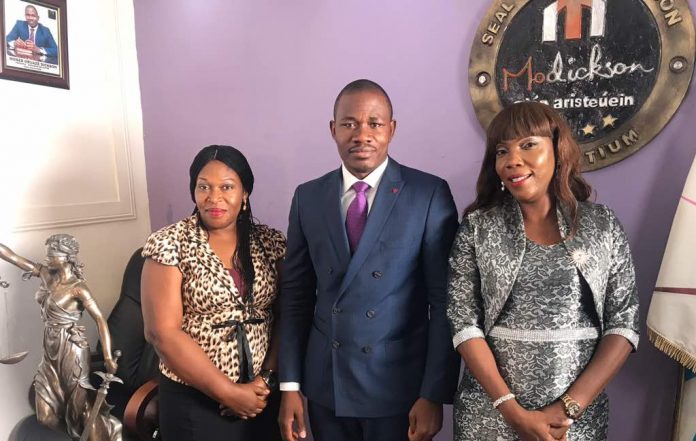 Women lawyers in Bayelsa under the auspices of International Federation of Women Lawyers, FIDA, has pledged to stand against any form of domestic violence against women and children in the society. The Chairperson of FIDA, Yenagoa branch, Barr Dise Sheila said this during a courtesy visit to the Managing Solicitor of TRIAX Solicitors, Moses Oruaze Dickson Esq who also doubles as the founder, Goldcoast Developmental Foundation, a non-profit that provides support for the low-income women and children.

This visit by the women lawyers is to discuss a possible partnership and legal support with TRIAX Solicitors and Goldcoast Developmental Foundation in curbing the menace of sexual molestation of children especially the girl-child in the Niger-Delta region.

Speaking during the visit which held in Yenagoa, Sheila said that even though there are laws in the country to protect the rights and well-being of women and children from all forms of violence and abuse, many of the affected persons are not aware of their rights or do not have the resources to pursue it.  And the few who have the understanding of these rights are scared of stigmatization and threats from the perpetrators and the society in general. “It is for this reason that we seek partnership with a law firm with a track record of fighting for the vulnerable especially women and children”, she said.

In his response, Moses Oruaze Dickson expressed his deep concern on the increasing cases of abuse against the female child and how the culture of silence is encouraging more perpetrators. “It is even sad when the victims are from impoverished homes and cannot afford the legal fees to fight their assaulters”. “We will do everything within our capacity to provide legal assistance to these victims, he said.

Oruaze stated that Goldcoast Developmental Foundation will serve as a mediator in championing this project by working with the police to speed up investigation, having sustainable partnership with certified hospitals to speed up medical examinations of victims/ survivors of such violence in addition to prevailing on the state Chief Judge to set up a System that will speed up trials of such cases. He added that the foundation will start a fundraising to get a home that will serve as a rehabilitation home for survivors to live in and start a new life, especially for the girls. “We will also work with FIDA through our law firm to provide pro bono legal services for victims of sex assault,” he said. Oruaze, however, stated that it is the responsibility of everyone in the society to stand up against perpetrators of sexual violence and encouraged women and children to speak out anytime they are under any form of violence and domestic abuse.

Present at the event included the O/C gender unit of the Bayelsa Police Command whose office is directly in charge of gender violence cases. In the coming weeks, this new alliance is expected to be launched with FIDA to help curb  the abuse of the female child.