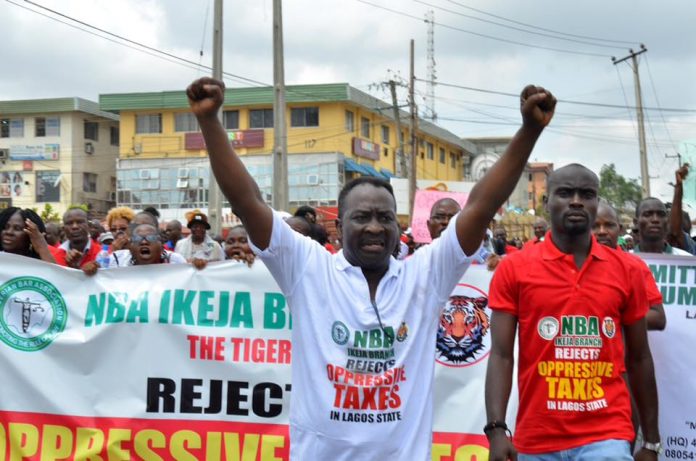 Chairman of the Nigerian Bar Association (NBA) Ikeja Branch Comrade Adesina Ogunlana said a legal practitioner bearing a message from a “close friend of Governor Ambode attempted to bribe him and the secretary of the Branch over the issue of the increased Land Use Charge and taxes now popularly referred to by lawyers in Lagos as Governor Ambode Toxic Taxes (GATT).

In a statement titled “NBA IKEJA BRANCH AND THE GATT ( GOV AMBODE TOXIC TAXES) ISSUE LATEST NEWS: ATTEMPT TO BRIBE CHAIRMAN, SECRETARY NBA IKEJA FAILS” the Branch Chairman narrated how he bluntly rejected both the message and the messenger.

This afternoon ( 26/3/2018) a legal practitioner bearing messages from a so called close friend of the Governor of Lagos State visited me in the office of Chairman NBA IKEJA BRANCH.

Three days ago, my visitor told me his principal ( Gov AMBODES friend ) is interested in an amicable settlement of the conflict over the GATT and would want to meet me in a neutral place.

I insisted on THE LAIR ( the secretariat of the Tiger Bar) and an open meeting , with other people present on Monday, 26/3/2018 .

Today, my visitor came alone on the ground that his principal felt uncomfortable to come to the LAIR . But the message remained the same, ‘let’s settle this matter in such a way it will not hurt government and the IKEJA BAR … and if I need LOGISTICS, it will be provided.

I responded that the visitor was sent on a clear bribery mission but that I would have none of it and that he would be held responsible if I was hit for refusing bribery and compromising the position of the IKEJA BAR, since that is the stock in trade of desperate Nigerian politicians.

My now visibly embarrassed visitor started a protestation of his innocence and that of his principal as regards any contemplation of murder.

The two other Tigers at the meeting at my instance recorded the interaction . My visitor also freely admitted chatting up the Tiger Bar Secretary, Muna Esegine (ostensibly for the self same purpose of compromise for mutual benefit of parties )but that the Secretary referred him to me . He left shortly.

It would be recalled that few days ago, President of the Nigerian Bar Association had demanded for a report on the NBA Ikeja’s activities on the Land Use Charge Issues. Read here