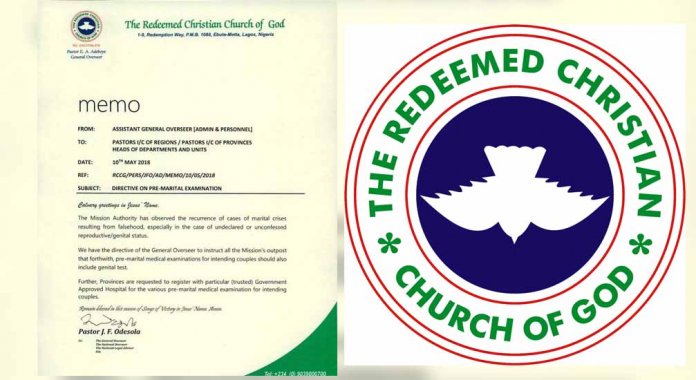 Just like the medical personnel, legal practitioners also hold divergent opinions on the directive by the Redeemed Christian Church of God, RCCG, to intending couples to submit themselves for genital test. While some lawyers hailed the decision as a welcome development, others argued that such mandatory genital test was tantamount to subjecting young couples in RCCG to degrading treatment.

According to Maxwell Balogun, “Section 38 (1) of the 1999 constitution, as amended and Article 18 of the Universal Declaration of Human Rights, granted every Nigerian citizen rights to freedom of thought, conscience and religion.

“The constitution also entitled every citizen the freedom to change his religion or belief. It is my opinion that while such directive from RCCG may appear draconian, intending couples have their right of choice.

“In as much as the church does not forbid its members who are not comfortable with the directive to exit its fold, I don’t see how anyone’s right could be infringed”. Another lawyer, Mr. Chuka Okafor, said: “Being a member of a church entails subscribing to its ordinances, rules of conduct and all its dos and don’ts.

I am not a member of RCCG, but I know that some churches have long before now, conducted one form of test or the other on intending couples. “Some churches conduct pregnancy test while others even go as far as probing if the girl had visited the the man’s home before.

“Some marriages were called-off by the church whenever it was discovered that there was breach of any of its moral codes. Even in my Roman Catholic Church, intending couples are mandated to attend marriage courses, failure of which may cost them the marriage.

“So I don’t see any legal issue on the Memo from RCCG. Don’t also forget that the church based its decision on a recurring problem it noticed and intends to stop”. Meanwhile, Mr. Kayode Oludare held a contrary view, as according to him;

“Section 34(1) of the 1999 constitution provided that every individual is entitled to respect for the dignity of his person. “Conducting a mandatory genital test on members of your church for the mere fact that they agreed to come together to fulfill one of the major directives of God to mankind, is very wrong and degrading.

“What is the primary purpose of such test when two people have agreed to come together to live as husband and wife? Do churches also conduct test to find out if the money their members donate as tithes and offerings were stolen?

“The pastor or church doctor who is conducting the test, who conducted his own test when he married? What then happens if intending couples go to another church to marry and then return to RCCG?

“What happens to RCCG parishes that are in very remote villages? Who will go there and conduct tests for couples there? To me, that directive should be challenged in court by any RCCG member who is denied his or her right to marry in the church on the basis of such genital test.