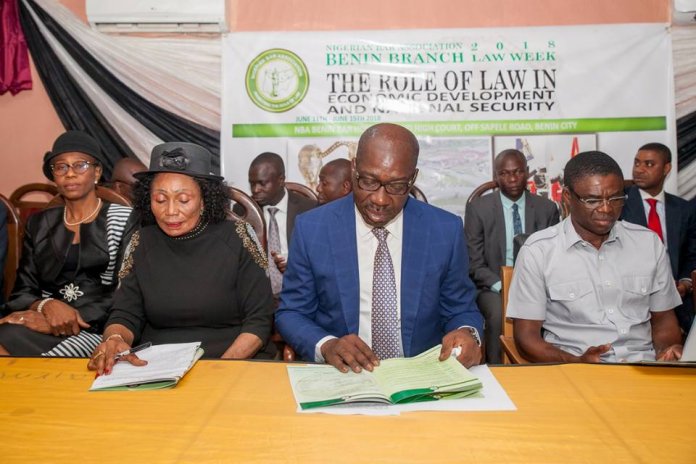 Edo State Governor, Mr. Godwin Obaseki, has disclosed that his administration has commenced work on the design and development of houses for judges beginning with judges of the Appeal Court and the Federal High Court in the state.

Obaseki said this while declaring open the Nigeria Bar Association (NBA), Benin Branch, 2018 Law Week and the official commissioning of the NBA Bar House in Benin City, on Monday.

He explained that the phased housing project will commence with the first five units for Appeal Court judges and judges of the Federal High Court, assuring that more units will be constructed as his administration plans to develop a colony for judges in the state.

“The real investment has to be in the people, system and the process. I have decided to relocate the Ministry of Justice to the new Block C in the state secretariat complex and will be fully furnished, computerised with an e-library to make the workplace conducive for our judicial workers,” he said.

The governor noted that his administration has hired 300 stenographers who are currently undergoing training.

“Court recorders are being procured and by the time the new court building is completed, they will be installed,” he said.
Obaseki said the goal and focus of his administration is to make the state the judicial hub of the region.

“In the past 19 months we have made tremendous progress in taking the state to an enviable height. Our administration has made appreciable impact in the lives of our people by insisting on the rule of law”.
The governor noted that his administration has created a sense of social security, stability, order and a sense of purpose which were made possible because of fear of sanctions.

“The judicial system has helped in restoring law and order in the state. It has also helped to drive our reforms,” he said.

The Chief Judge of Edo State, Hon. Justice Esohe Ikponmwen, commended the Edo State branch of the NBA for the success recorded during the 2018 Law Week.

The Chief Judge, who was represented at the occasion by Hon. Justice Ada Ehigiamusoe, said: “The various topics treated will go a long way to further stabilize and enhance the development and growth of the nation and the law profession”.

Delivering the keynote address titled The Role of Law in Economic Development and National Security, Dele Adesina (SAN), said the greatest threat to the survival of Nigeria as a nation is security and solving the security problem will mean solving the economic problem.

NHRC, NBA, Others Decry Injustice Over Suspension of Policeman for 25...