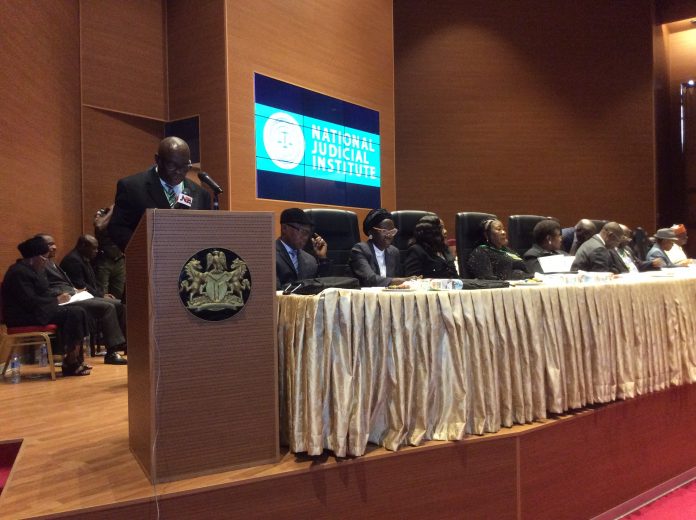 Chief Justice of Nigeria, Honourable Justice W.N Onnoghen has declared this year’s refresher course for Judges and Kahdis. The refresher course with the theme “Enhancing the Quality of Judicial Servces” is holding at the Andrew Otutu Obaseki Auditorium, National Judicial Institute, Abuja between 19th -23rd March, 2018.

The course which is aimed at equipping judges and khadis on modern judicial practices is an effort by the National Judicial institute to achieve better and efficient judicial system.

Among the judicial eminent who joined the CJN at the opening ceremony were, Hon. Justice B. A. Adejumo OFR, President National Industrial Court of Nigeria, State Chief Judges and Kadis and many others.

In her welcome remark, the Administrator of the NJI, Hon. Justice R. P. Bozimo OFR, emphasized that the main essence of this year’s refresher course is to cross fertilized ideas for better and optimum judicial system.

His Lordship, Hon. Justice W. S. Onnoghen while declaring the ceremony open appreciated all the judges for their commitment to justice while maintaining that Nigerian Judiciary remains one of the bests in the world. Muslim Law Student Not Called to Bar for Wearing Hijab