Home Opinions Has President Buhari Breached Provisions of the Electoral Act Simply Because Some... 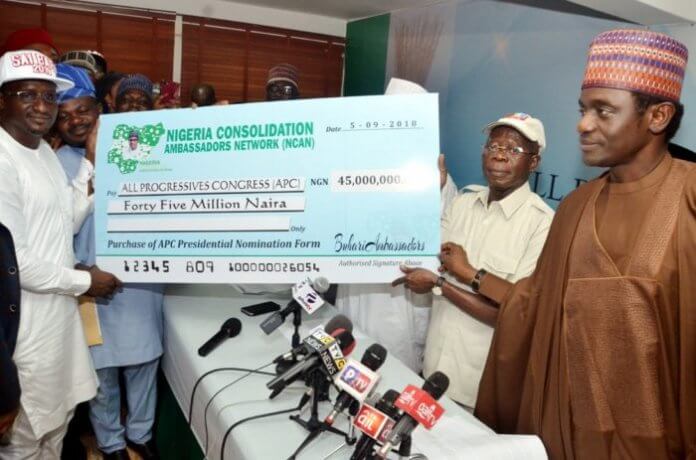 SECTION 90(1) OF THE ELECTORAL ACT specifically gives INEC the power to limit the amount of money or assets an individual can contribute to a political party. The section provides as follows:

“The Commission shall have power to place limitation on the amount of money or other assets, which an individual or group of persons can contribute to a political party”.

The Act in addition to the above power, goes further in section 91(9) and (10) respectively, to prohibit and criminalize donation of up-to one million naira by an individual or a group to a candidate.  Various punishments are provided for such a compromised candidate by section 91(10), ranging from 3 months imprisonment and N100, 000 fine or (both), to 12 months imprisonment and N 1 Million or (both).

In the case of an individual or any other entity who donates more than N1, 000,000 to any candidate of a political party, section 91(11) criminalizes this by imposing punishments ranging from 9 months imprisonment or N500, 000 fine (or both), to such an individual or entity.

However, the important issue to be analyzed here is the use of the phrase “donation to a candidate”. Looking at the recent political happenings in the country whereby some CSOs, individuals, associations  and other interest groups came together to purchase nomination forms for some interested individuals who intend to contest for their party primaries, can that really be seen as a donation within the context of the Electoral Act?

Specifically, can the purchase of the nomination and expression of interest form for N 45M by a group of persons for President Muhammadu Buhari, for example, or for PDP’s Atiku Abubakar for N 12M be regarded as a breach of the Electoral Act of 2010? I think not.

Black’s Law Dictionary, 8th Edition, defines a “donation” to mean “a gift, especially to a charity”.  It also defines the word “purchase” to mean “the act or an instance of buying”.

Looking at the above definitions, can it be said that the N 45M with which a group purchased PMB’s nomination form was really “donated” to President Buhari himself, who is an interested contestant, or that the form was “purchased” for him?

For me, the act of these individuals or groups that purchased the form for PMB or for Atiku merely deals with “purchase of nomination and expression of interest form” and not “donation” to an aspirant. Buhari is not yet a candidate. He is not even yet an aspirant, as I shall show anon, through a plethora of case law. He is just an interested person intending to be an aspirant. The form itself is a mere nomination and expression of interest form.

What then is the difference between a “candidate” and an “aspirant”, since Buhari merely expressed an intention to be an aspirant which has not yet graduated to the lofty level of being a candidate?

Nigerian courts have ware-housed corpus of jurisprudence on these issues.

A critical look at the following definitions will clarify some of the above critical issues.

“The petitioner or its candidate obviously means a party or its candidate; there is no atom of ambiguity in that. A candidate of a party is as defined by Section 32(1) of the Electoral Act which reads, “every political party shall not later than 120 days before the date appointed for a general election under the provision of this Act, submit to the Commission in the prescribed form list of the candidates the party proposes at the elections. Candidates refer to those sponsored by the party at the election. Per Adekeye, J.C.A. (Pp. 31-32, paras. F-A)”

“The Act however, does not go on to define the scope of the terms ‘candidate’ and “election”. By the Chambers 21st Dictionary Revised Edition, 2006, ‘Candidate’ is defined as “Someone who is competing with others for a job, prize, parliamentary seat, etc,” while Black’s Law Dictionary, 7th Edition defines ‘Election’ as “The process of selecting a person to occupy a position or office, usually a public office.”

On the definition of the words “aspirant”, see the cases of: PDP & ANOR v. SYLVA & ORS, where it was held:

“An aspirant is a person with a strong desire to achieve a position of importance or to win a competition. Indeed Section 87 (1) of the Electoral Act States that: “A political party seeking to nominate candidates for elections under this Act shall hold primaries for aspirants to all elective posts.” From the above it is clear that an aspirant is a person who contested the primaries. An aspirant is thus a candidate in the primaries. Per RHODES-VIVOUR, J.S.C. (P. 37, Paras. B-D)”. The decision was subsequently followed in Eze v. Ugwueze (2014) LPELR-22481 (CA).

This means that it is when a person actually participates in the primaries that he can even be called an aspirant. The reverse of this is that all other persons merely seeking to participate in the primaries are not yet aspirants. They may just be described as interested persons intending to be aspirant. As a necessary corollary, a candidate is a person who has contested primaries as an aspirant, won the primaries, and is now participating or contesting in the general elections with candidates from other political parties.

Section 156 of the Electoral Act also defined aspirant as a person who aspires or seeks or strives to contest an election to a political office. It is obvious from the above definition that obtaining nomination form, being screened and cleared provisionally and other pre-primary steps as argued by counsel do not combine to make a member of a political party an aspirant within the meaning of S. 87(9) of the Electoral Act. It is the participation in the contest/selection that confirms the status.” Per MSHELIA, J.C.A (Pp. 29-30, paras. E-C)”.

From the litany of cases analyzed above, it is crystal clear that for someone to graduate from position of an “aspirant” to that of a “candidate” to a political office, the person must first pass through three stages:

(1). the stage of being a mere “interested person seeking to be an aspirant”.     That is why the form purchase is a mere “nomination and expression of interest form”.

(3). the stage of being a “candidate” who actually contests election against candidates from other political parties.

Indeed, from the case of EZE v. UGWUEZE & ORS (2014) LPELR-22481(CA), cited above, the mere act of obtaining nomination and expression of interest form, being screened and cleared provisionally and other pre-primary steps do not combine to make a member of a political party an aspirant, within the meaning of S. 87(9) (which deals with nomination of candidates by political parties) of the Electoral Act.

PMB can thus be said not to even be an aspirant yet. It is his actual participation in the contest or selection during the primaries of APC fixed for September 20, 2018, that will confirm his status as an aspirant. If he wins at the primaries, whether through real contest, or by mere affirmation (of course the latter is truer), then he becomes a candidate. He is when the provisions of sections 91 (9), (10) & (11), are fully activated as regards how much can be contributed towards his election.

For now, President Buhari, or Atiku, or any other intending aspirant of any of the political parties (including the over 15 of PDP), who has his nomination form purchased for him, commits no offence known to the Electoral Act or the Nigerian Constitution.

Judicial Financial Autonomy: A Way Forward for the Administration of Justice in Nigeria (2)

The Power of the Governor of CBN to Remove Bank Directors: Between Fiction and Legality