Home Court room news I Did Not Murder My Wife, I Only Slapped Her – Dock... 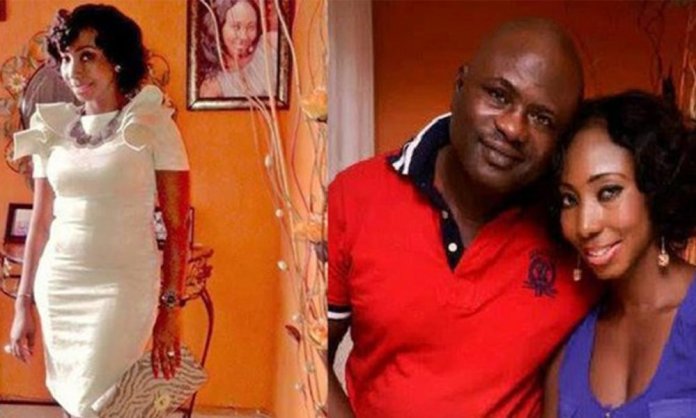 Lekan Shonde, a 53-year-old dockworker, who is facing trial for allegedly beating his wife, Ronke, to death on Wednesday told an Ikeja High Court that he did kill his spouse.
The News Agency of Nigeria reports that Shonde, during his testimony, had also accused his wife of having an extra-marital affair with one Kayode.

Recalling the events of May 6, 2016, the day his wife died, Shonde while being led in evidence by his lawyer, Robert Clarke (SAN), said he overheard his wife, whom he referred to as Adunni having a phone conversation with her lover.

He said: “On the said day, I got into the compound, I climbed the staircase to my sitting room and I overheard Adunni speaking on phone, saying ‘Kayode you are sweet o, what did you use in sleeping with me?

“I slapped her from behind and she fell forward and hit her head on the wall, she later stood up and held me and she said she was sorry, she went to the room to change and went to have her bath.

“Earlier, she had called me informing me that on my way home, I should buy moi-moi (steamed beans) and pap for our dinner. She told me that the nanny had prepared Indomie for the kids.

“After she had her bath, she asked what I will eat with the moi-moi and I told her that I will have garri (dried cassava flakes) while she had her moi-moi with pap.

Shonde told the court that when he was leaving for work in the morning, he saw Ronke still lying on the couch with her mobile phone beside her and he dropped some money beside her and left for work.

Explaining how he heard about his wife’s death, he said: “In my place of work we do not go in with our phones because it is a depot, we drop our phones with the security”.
He added: “Around 1 or 2pm, I went to check my phone my battery was dead because the previous night there was no light in the house.

ALSO READ   FRN vs. Usoro: I Lied Against the Defendant, Zenith Bank Opened Account and Made Deposit Without His Consent – EFCC’s Witness Tells Court

“At 4pm, I saw my cousin, he came to the depot to see me and he informed me that my father sent him to me that Adunni is dead and I said which Adunni?
“This was during the era when trailers blocked the roads to Apapa and I didn’t get to Oshodi until 9.30 pm that night and I went straight to see my father and some elders.

“When he informed me about my wife’s death, I could not believe it, I said it is a lie.”
While being cross-examined by Y. G Oshoala, the lead State Prosecutor, Shonde revealed that he was 51 years old at the time of his wife’s death while Ronke was 39 years old while their son and daughter were six and five years old respectively.
He denied taking away his wife’s phone on the day of the incident and writing the police statement that was presented in court, adding that he could not read the statement aloud because he had bad eyesight.

Oshoala said: “This is not the first time you knew your wife was going out with Kayode, you put it in your statement that Kayode had been to your house.
“If you truly loved your wife, you would have left immediately for your home when you heard of her passing but you did not appear until days later.
“Would you be surprised that the autopsy reveals brain injuries, hemorrhage, damage to the neck and so many injuries?

“I put it to you that your normal habit was to lock the door, beat your wife and hit her head on the wall, I also put it to you that she was going to divorce you.
“There must be a lot of force for a grown adult to fall down from a mere slap as you claimed, is that how you treat the woman you love?

“You didn’t go to the police on the second day after the incident as claimed, you went after the sixth day.”

Responding, Shonde denied that his wife was seeking a divorce and that he did not physically abuse her.

He said: “I did not go to the house because my 88-year-old father said that from what he heard, people can do something unpalatable to me, so my family went to the house on my behalf.

“By the second or third day, I turned myself in to the Rapid Response Squad.
“Before God and man, Adunni had no plans to divorce me, I do not habitually beat her, I was furious when I heard her speaking to Kayode and I slapped her.”
Following his testimony, Shonde, the only defence witness, closed his case.

Earlier during proceedings, Shola Adamolekun, the nanny to the Shonde family and sixth prosecution witness, told the court how she discovered the lifeless body of Ronke in the house.

While being led in evidence by Oshoala she said: “I resumed work in the morning at 6am, the gate to the house was usually left open for me by the defendant when he leaves for work early in the morning so that I don’t disturb the people living downstairs.

“I heard him and said ‘Temi where are you?’ he said ‘see me I’m here’ I asked ‘where is your mummy?’ and he said his mummy is in the parlour and that he had been waking her up but she is not responding.”

The nanny told the court that she got a ladder from the neighbour which was used by some neighbours to get to the window of the Shonde’s flat upstairs to peer into the apartment.
She said: “They told me that from what they could see, my boss could be dead, I called Daddy Temi (Shonde) to inform him that they could not gain access to the home; he said he was coming but he never came.

“There was a cousin of Mummy Temi (Ronke) who was there and he also assured me that the defendant will come.

“My boss was lying on her back on the floor, remembering how she looked that day does not give me joy, I did not have a key to the house and only my boss and her husband had keys to the house.”

On cross-examination by Robert Clarke, Adamolekun told the court that the children told her that they did not know what happened to their mother because they were asleep throughout the night.

She said: “I do not usually know what goes on in the house after I close from work and on that day, the children said they have been trying to wake their mummy but she was unresponsive.”

NAN recalls that Shonde, who was arraigned on October 24, 2017 on a charge of murder had pleaded not guilty to the charge.

According to court documents, Shonde was involved in an altercation with his wife, which led to her death.

After Ronke’s death, the dock worker allegedly locked up the home and fled, leaving his spouse’s corpse in the living room.

The alleged crime scene was discovered by the Nanny and neighbours, who heard the cries of their two young children, struggling to “wake up” the lifeless body of their mother.
Lekan was said to have surrendered to the authorities five days later after an extensive manhunt.