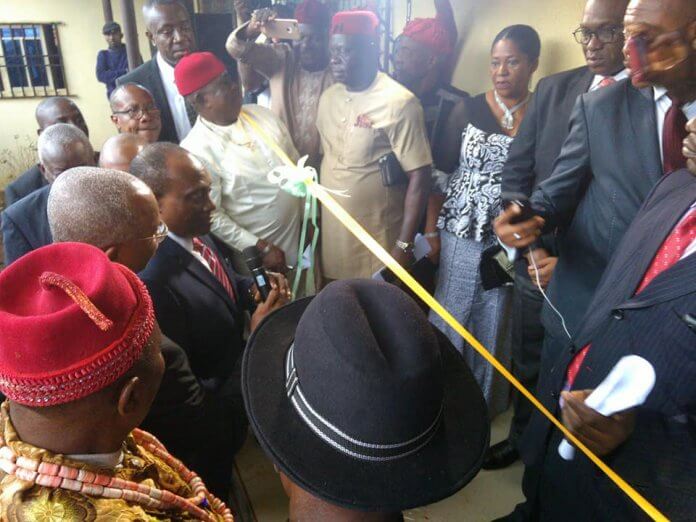 The difficulty faced by Ideato indigenes in Imo State, who attend court sittings in Orlu after the main court in Urualla became dilapidated by many years of non-maintenance, motivated a former Attorney General and Commissioner for Justice, Chukwu Machukwu-Ume (SAN) to change the story for good.

The community refurbished the High Court in Urualla, built a brand-new court in Akpulu with necessary facilities. Also, the people had completed a Customary Court in Akokwa on March 2, 2017.

The legal luminary mobilized wealthy members of the Urualla Federated Union (UFU), who constituted the ‘Patriotic Six’ to facilitate the renovation of the Imo State High Court, Urualla complete with tiles and corrugated roofing.

Also, through the community self-help, the Magistrate Court in a neighbouring community, Akpulu was initiated and completed from the scratch through the approval of the Imo State judiciary.

The courts were commissioned on July 26, 2018 by the Chief Judge of Imo State, Justice P.O. Nnadi in the presence of enthusiastic indigenes of both communities and traditional rulers of the autonomous communities in Ideato LGA.

The UFU, businessmen and lawyers from the communities realized the value of access to justice in their community, Machukwu-Ume said.

“You are a shining example of what can we do to keep society developing! Today the Imo State Magistrate Court, Akpulu by God’s Grace is coming on stream. This court will remain the best, largest single Magistrate Court premises in Nigeria,” he said.

Away from the deficit of present facilities in many courts and government offices, where ventilation, conveniences and other support attachments are absent or in a state of disrepair, the new court in Akpulu is purpose-built.

The project was realized through cash donations, building materials, furniture and generating sets for constant electricity.

“It has a total of six toilets. It has an exhibit room and maximum cell,” he added.

In his speech, the Justice Nnadi extolled the work done by the indigenes of Ideato and described Machukwu as “Ekwueme”, meaning one who does what he says. PUNUKA Attorneys’ Webinar: ‘Guaranteeing the Integrity of Court Records, Information in the Aftermath of Fire Damage to Courthouses’ [Register]

2nd Lawyers in Oil and Gas Conference to Hold in March...