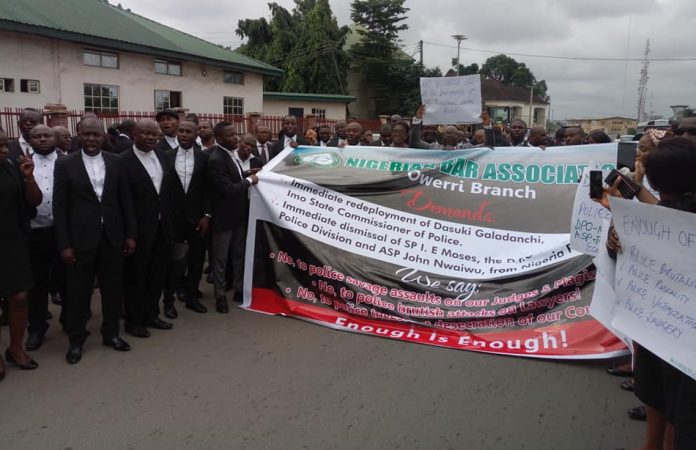 Court proceedings were stalled in Imo on Monday as lawyers in Imo branch of Nigerian Bar Association commenced three-day protest against alleged police brutality on their members.

The protesting lawyers displayed placards with different inscriptions such as “IGP please redeploy Imo CP now over impunity”, and “Police Service Commission must sack the DPO who led attack on lawyers.”

Litigants who came to the courts expressed disappointment over the development and urged the police authority to investigate the matter.

The NBA Chairman, Mr. Damian Nosike, told news men after the protest that the lawyers decided to boycott the courts for three days.

He said that beyond the boycott, the union would also initiate civil action against the police to enforce the rights of the victims.

Nosike called for the immediate redeployment of Commissioner of Police in Imo, Mr Dasuki Galadanchi, as well as the sack of Ngor-Okpala Divisional Police Officer, who allegedly led the attack on the lawyers.

He said it was an impunity for the police to assault lawyers, adding that the branch would pursue the matter to a logical conclusion.

An Umuneke Magistrates’ Court in Ngor-Okpala Local Government Area on had Thursday struck out a charge against three armed robbery suspects after two lawyers, Emma Eke and Chukwuemeka Anyanwu, objected to their arraignment.

Consequently, police officers allegedly led by the DPO of Ngor-Okpala, SP I.E. Moses, the same day invaded the court and rearrested two of the three suspects, as one escaped, and also arrested the lawyers.

The lawyers were later arraigned on Friday on charges of aiding the escape of the suspects and complicity in the matter.