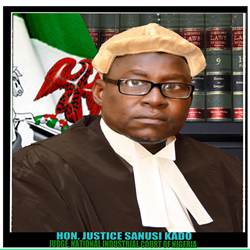 The National industrial Court sitting in Abuja on Wednesday 10thJanuary, 2018 dismissed a suit challenging the recall of the Acting Secretary of Code of Conduct Bureau [CCB], Mrs. Folasade Kolawole, affirming that there was no contempt of court as the injunction was obtained without locus.

Mrs Kolawole was recalled by the office of the Secretary to the Government of the Federation after she withdrew her notice of retirement within two months out of the statutory three months in line with public service rules and regulations..

Some staff of the Bureau led by a director however joined hands with the Royal Integrity and Accountability Organisation to stop the Presidency from proceeding with the recall of the Acting Secretary. Ruling on an application by the NGO, Justice Waziri Abali then gave the Order in favor of an ex-parte application, pending the determination of the substantive matter.

At the resumed hearing of the case in Abuja, the Office of the Secretary to the Government, CCB and Mrs. Kolawole however, objected to the order on the dual ground that that the petitioner has no locus standi and that the court has no jurisdiction to hear the case.

Justice Sanusi Kado in his ruling held that the petitioner has no locus standi as it was not registered before the law and has nothing to lose or gain on the matter.

The court, which described the petitioner as busy body, also declared that it has no jurisdiction to entertain the suit.

Justice Kado also affirmed that the SGF did not disobey any court order, noting that the recall was in order and in line with service rules.

Lawyer to the defendant, Shuaibu Mustapha told journalists that the judgment was a vindication of its submission that the petitioner was not known to law and can therefore not secure any valid injunction.

According a body not known to the law cannot secure any injuction, adding you cannot build something on nothing.

“In this case there is no contempt of court as there was no valid injunction “, His Lordship stated.

He stated that the recall was within the provisions of the public service rules as the Acting Secretary withdrew her notice of retirement within the three months stipulated.

He further noted that Mrs Kolawole was never paid any retirement benefits and that she has resumed according to directive from appropriate quarters stipulated by public service rules.