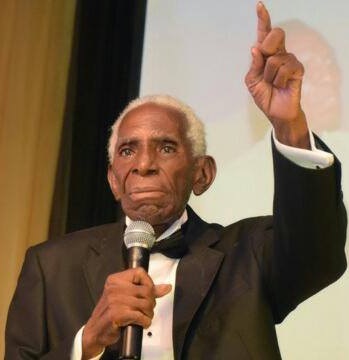 A true son of Lagos whose destiny and values were shaped by resistance to colonial indignities, Tunji Gomez’s life is bound up with the histories of both Lagos and of the Bar. His grand-uncle and post-humous client, Christopher Sapara-Williams, was also Nigeria’s first lawyer. With paternal roots in Ilesha, Sapara-Williams, was born in Freetown, Sierra Leone, in July 1855. Admitted to the Bar of the Inner Temple in England in November 1879, Sapara Williams returned to Lagos, where, on 13 January 1888, he became the first Nigerian enrolled to practice law. He went on to become a quite influential political actor over much of the next quarter century until his untimely death in 1915. Nearly 70 years later, Olatunji Gomez would fight the military government to prevent them from desecrating the remains of Sapara-Williams, who was buried at the Ajele Cemetery, now occupied by the Ajele Stadium.

In 1901, Eshugbayi Eleko ascended the throne as the Oba of Lagos, in what would become a defining reign for Lagos. This period also coincided with the colonial consolidation in the territory that would become Nigeria. In the inevitable conflict between the colonists and the traditional institutions, lawyers proved pivotal. The Eleko repeatedly clashed with the colonists on several issues. These clashes revolved around two major issues – racial segregation and free expression for the African or native populations. One century later, these same issues – discrimination and freedom of expression – and how we react to both continue to define the Nigerian space.

Several issues crystallised these flashpoints. One was the Water Tax (for the establishment of Iju Water Works) in 1908 and another was the control of traditional lands. The so-called Water Riots that followed upon the imposition of Governor Egerton’s Water Tax in 1908, were the protest of the people of Lagos under the Eleko against the colonial Water Tax. Since the piped water was meant mostly for the white people, they reasoned, the responsibility for paying it should have been theirs.

In the aftermath of the riots, two things happened. In 1909, first, the Colonists established Kings’ College (KC). In the same year, secondly also, they passed the Sedition Ordinance(s) of 1909. These two decisions would come define the life of Tunji Gomez who was yet unborn at the time. While the Sedition Ordinance became a ready tool in dividing and co-opting Nigerian public opinion, KC (or the Old School as it would come to be known) would become a factory for producing human resources and moulding progressive opinion against colonialism. One of them was Olatunji Gomez.

Deploying the fear of prosecution, the colonists successfully split elite opinion, attracting the support of some pro-establishment types, led then by another famous lawyer, Kitoyi Ajasa who would later become a judge and close confidant of Lord Lugard. The seeds of the ideological cleavage in Nigeria’s legal profession had been sown with an activist side led by Sapara-Williams and a collaborationist wing pioneered by Kitoyi Ajasa. While Sapara Williams had his nomination for a knighthood turned down, Kitoyi Ajasa, who would later go on to become the leading Freemason in the territory as seven-time Worshipful Master of Lagos Lodge No. 1171 between 1901 and 1928, won the confidence of Lugard, becoming both a knight and a judge. For most observers, it seemed clear that the material benefits of collaboration with officialdom far outweighed the troubles from activism.

The matter of control over traditional lands in Lagos would end up before the Judicial Committee of the Privy Council in the case of Amodu Tijani, decided in July 1921. The Eleko rallied behind the Idejo Chiefs, led by Amodu Tijani, who had the support of Herbert Heelas Macaulay. For the hearing before the Privy Council in 1920, Herbert Macaulay travelled to London with the Oba’s Staff of Office in support of Amodu Tijani and the Chiefs. While in London, Herbert Macaulay issued a statement claiming that the Eleko was the King of over 17 million Nigerians and in possession of territory more than three times that of Great Britain. Despite a healthy revenue of over Four Million Pounds, he claimed, the British had reneged on a treaty commitment to compensate the Eleko. Embarrassed at being publicly called duplicitous in this way, the British required the Eleko to disown Herbert Macaulay. He issued a public statement clarifying his position on Herbert Macaulay’s statement but declined to disown him through the Oba’s Bell Ringers as required by the colonists.

Unable to secure the support of the popular Oba, the colonists chose to head off rising tension by deposing him. On 6 August 1925, they issued an ordinance de-stooling him and, two days later, on 8 August arrested and removed him into internal banishment in Oyo. Oba Ibikunle Akitoye was installed. His rule lasted an uncomfortably brief three years largely because he lacked the support of the people of Lagos. Indeed, in 1926, he suffered physical attack. Supported by the elite and people of Lagos, the deposed Eleko took his case to the courts, fighting all the way to the Privy Council who, on 19 June 1928, granted him permission to file a writ of habeas corpus. Oba Akitoye, upon learning of this development and realizing that his claim to the throne was slipping, apparently took his own life 48 hours later in a tragic misadventure in which copious amounts of alcohol were reportedly involved.

The unease around this was not good for the economy of Lagos. Personal fortunes and vocations were adversely affected. Three months before the death of Oba Ibikunle Akitoye, amidst this tumult, on 18 March 1928, in the prominent Lagos lineage of Doherty and Gomez, a young child was born to George Kingston and Beatrice Adesiyan Gomes. Deeply involved as they were in the struggles of the people of Lagos, they named their new son “Ola-Tunji” meaning “wealth has been revived”. It was both a wish and a prayer for the restoration and revival of the traditional wealth of Lagos. At his Baptism, he would take the name Fortunatus. 90 years later, the Lagos and Nigerian Bars are the fortunate legatees to a life lived in the service of good conscience.

As young lawyer, Tunji Gomez ran a newspaper column under the moniker, “It’s a Matter of Conscience.” At the Bar where he practiced for over 57 years, this is identity that defined him. Yet, Tunji Gomez was in reality a leader long before he got to the Bar.

The beginning of a somewhat intrepid teenage years would take young Olatunji Gomez through the halls of Baptist High School in Lagos, Eko Boys High School, and Abeokuta Grammar School before he was admitted in the second year at KC in 1944, arriving just in time to encounter another season of tumult at the Old School. KC was the oldest Unity School in Nigeria. At the beginning of World War II, the Colonial Government requisitioned the Kings’ College premises for war purposes on behalf of the West African Frontier Force (WAFF), as the army was then known. The students were moved out to make-shift premises on Custom Street, which were increasingly not very conducive for learning. Tunji Gomez recalled that “it was a wicked punishment for students who were demanding for their rights. The food was bad, there were bed-bugs, there were mosquitoes, and you had to walk about two miles from Custom Street to get to Kings’ College.”

This generation of KC produced many young men who would go on to great things. Olatunji Gomez was a prefect and senior to Lateef Jakande and Emeka Odumegwu-Ojukwu. He was also senior to Alex Ekwueme. As Olatunji Gomez was leaving KC in 1948, Lateef Olufemi Okunnu joined the school. He graduated in 1953. Femi Okunnu would proceed in 1960 to career in law and public service that would see him serve as Federal Minister of public works, Senior Advocate of Nigeria (SAN), and, like Olatunji Gomez, a Life Bencher.

In 1944, discontent about the living conditions at KC boiled over into a students’ protest, at the end of which the colonial authorities detained, tried and expelled 75 students. Another eight students were conscripted into the army. At their trial, the students received free legal assistance from Eusebius James Alexander Taylor, one of the early activists at the Lagos Bar and one of the legal advisers to Herbert Macaulay’s NCNC. Alexander Taylor had been joined three years earlier, in 1941, by his son, James Idowu Conrad (JIC) Taylor, who returned with an Oxford MA degree in 1941 to join his father’s practice. Although he lost the case, Alexander Taylor made an impression on a young man and won a convert. Olatunji Gomez recalls: “the way he conducted the case, the way he spoke and defended them, from that day, I made up my mind that I would be a lawyer in order to defend people against all manners of injustice.”

Alexander Taylor died in 1947 and was not there to witness the exploits of his young protégé beginning the year after his death.

Olatunji Gomez took his final Cambridge high school examinations in 1948. It was, coincidentally also, the year in which the world adopted the Universal Declaration of Human Rights (UDHR). In the same year, he would also himself personally lead a second famous students’ protest at Kings College. It was a matter of conscience.

Olatunji Gomez would subsequently proceed, not to England as his parents desired, but to Trinity College in Dublin, Ireland, where he followed in the footsteps of Dr. Jaja Wachukwu (Nigeria’s Foreign Minister at Independence), Dr. Egbert Udo-Udoma (former Chief Justice of Uganda and Justice of the Nigerian Supreme Court), Kayode Eso (former Justice of the Nigerian Supreme Court), and Emmanuel Araka (former Chief Judge of Anambra State). In 1961, at the age of 33, Olatunji Gomez enrolled and was admitted to the Nigerian Bar.

Olatunji Gomez was a vocal and consistent advocate for the abolition of the privilege of Senior Advocate of Nigeria (SAN). He summed up his case with characteristic brevity: “[t]he system itself is corrupt and is not based on merit. It is oppressive to the junior ones to the extent that they cannot earn a good living out of the profession.”

In an age in which the leadership of the NBA contrives to manufacture crooked elections, the need for lawyers of conscience will be more not less. It is to be hoped that the abiding example of Pa Olatunji Fortunatus Gomez will inspire all who feel a calling as lawyers to do right because “It’s a Matter of Conscience.”