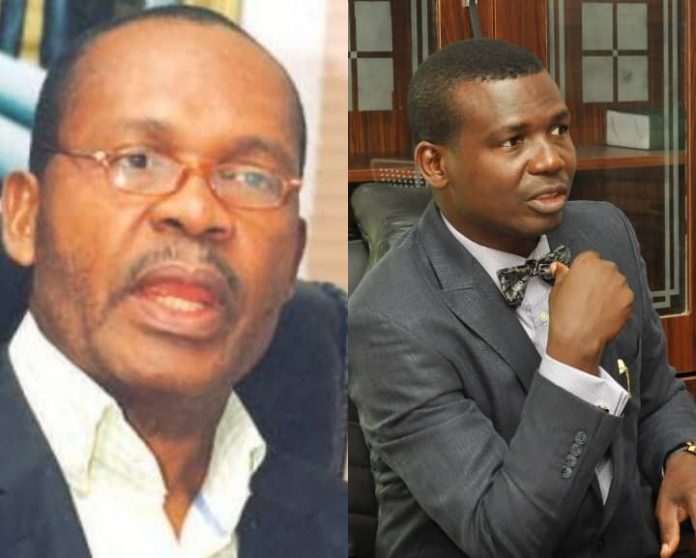 Right Activist, Mr. Ebun-Olu Adegboruwa has withdrawn the suit he filed against APC Chieftain Joe Igbokwe over a statement he made on facebook alleging that Gov. Wike of Rivers State bribed Supreme Court Judges.

In a statement made a while ago on his facebook platform, Adegboruwa gave reason why he withdrew the suit.

“On Monday July 16, 2018, I took up Mr Joe Igbokwe, on his Facebook post, wherein he asserted that Governor Nyesom Wike bought judgment from the Supreme Court of Nigeria. Subsequently I filed a case at the Federal High Court, to get the Honourable Attorney-General of the Federation, to take steps to verify the allegation or prosecute the author.”

“Mr Joe Igbokwe has since withdrawn the offensive post from his Facebook wall, he has retracted it, he has offered an unreserved apology and he has given a firm undertaking, not to engage in such conduct, in future, when he stated that:

“It was a mistake and I take responsibility for my action. It was a personal opinion. This is to tender an unconditional and unreserved apology to all those felt (sic) offended by my post and a promise to avoid such drivel in future.”

“In my mind, this settles the substance of the case filed in court, which was meant to protect the judiciary as an institution, not necessarily to shield any person identified or suspected to be involved corrupt practices, from probe or prosecution.”

“I have consulted widely, I have read and digested all comments and suggestions in this regard and I’m mindful to align with the view that the apology and undertaking of Mr Joe Igbokwe should suffice to put an end to the case filed in court.”

“Accordingly, the entire claims stated Suit No. FHC/L/CS/1240/2018, between Ebun-Olu Adegboruwa, Esq. v. The Honourable Attorney-General of the Federation & Mr. Joe Igbokwe, have been wholly discontinued against all the defendants in the said suit. A notice of discontinuance has been filed at the Federal High Court on July 24, 2018, effectively withdrawing the case.”

“Individual Judges may err, some lawyers may falter and even the judicial system may appear weak and feeble, but we cannot afford to destroy the institution itself, as the options for our nation, to function without a respectable judiciary, will be catastrophic. A society where the rule of might prevails cannot enjoy peace and prosperity.”

“I thank you all for your kind support, observations, criticisms and counsel.”

“Together, we shall make Nigeria great.”

Adegboruwa had filed an action seeking an order of Mandamus to compel the Attorney General of the Federation to cause an investigation into the reckless statement made against the Judges of the Supreme Court. Read here