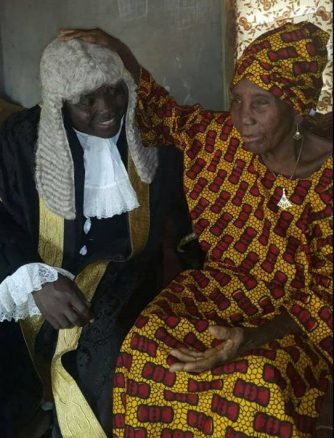 Mr. Jubrin Samuel Okutepa SAN has written a very touching tribute to his late mum Mrs. Alewo Ramatu Martha Okutepa who passed on in the early hours of Friday, 22nd December, 2017 at the age of 103.

Here is what he wrote:

My Mother, Iya! the  Great Matriarch of Uwani Atuluku Achogba family. You were the first daughter and first child of Uwani Atuluku Achogba of the Aju-Ocholi Dynasty of Attah Igala. You were a born advocate who had answers to every issues raised with you. You travelled wide in town hence the name “Alewo.” You were a virtuous woman. You were so good to us. You lived a very simple life while on earth and made no enemies.

Since the 8th of December 1982, after you lost your husband, my father, you remained in the Apata compound and kept my father’s compound alive. You always said to us “I am watching over the compound for my husband.”  You called me ‘Oko’ meaning husband. Yes, husband I was to you; but mother you were to me. Seeing the lifeless body of this my ‘wife’ broke me! The matriarch of the Uwani Atuluku Achogba family, the first daughter and first child of Uwani Atuluku Achogba of the Aju-Ocholi Dynasty of Attah Igala has gone!

Three days to your death Iya, I spoke with you. You were as jovial as ever. You told your usual jokes with me. I called you Alewo Oma Uwani Idenekwu and you called me Jibrin Oma Okutepa. You did not give me any sign that you were going home. Now I am an orphan. Iya, your death made me an orphan! But thank God I’m not looking for orphanage home to stay. God has done us well. Iya you were an epitome of humility. You were kind to a fault. There can be no better fulfillment! You saw us from nothing to something.

Of all your children you suffered for me the most. You were in labour for three (3) days with excruciating pain before you were finally delivered of me through a traditional midwife attendant. All hope was lost that you were going to survive while giving birth to me. But you did not die then. You lived to a good old age of 103 years. You are not even dead. You just went home to rest. Iya you did not wait till 1st January to celebrate my 58th birthday with me. I was planning to celebrate Christmas with you. But you left without telling me.

Go well Iya! Greet Baba for me. Don’t forget to tell him my story. Do you remember how you attended my swearing in as a Senior Advocate of Nigeria in Abuja on the 26th August 2011? Please tell Baba about it. Tell him that Oko is now a lawyer and that his blessing on me on that 1st October, 1980 when I left for Makurdi has produced good result. Tell him that God saw me through to the peak of my career. I still have many stories to tell you, but you can’t talk to  me anymore.

Iya, I was at the General Hospital Idah mortuary with your last child Omika to see your  corpse. Where I saw you was not the usual comfortable place I would love you to be. You did not talk to us! You did not welcome us! I cracked the usual jokes, but you did not respond; I greeted you but you ignored me. I cried but you refused to wipe my tears as usual. It then dawned on me that your journey on earth has come to an end.  This life is a journey! A market! You came; you traded and you had us! Iya, you left a legacy!  I am happy to have come through you. Thank God for your life and for a life well spent. No matter what we gave you, where you have gone to is a better place.

You were such a faithful mother. Your humility was infectious.

I covet your longevity.

You put the cap of longevity on me and the rest of us.

Your legacies live on.

I will miss you Iya. I see your death as a celebration of life.

Mama’s burial is scheduled to hold as follows:

Receptions follow immediately after the final interment at Ojodu Ofu LGA of Kogi State between 12noon to 2pm.