Trouble seems to be brewing at the Nigerian Bar Association (NBA) Ikorodu Branch. Reports reaching us reveals that the former Chairman of Ikorodu Branch Mr. Dotun Adetunji is frustrating all efforts by the current Chairman Mr. Levi Adikwaone to conduct a free and fair election in the Branch come May 23, 2018.

According to our source, the past Chairman has continued to interfere with the activities of the NBA Branch leadership despite the fact that he failed to properly handover to the present leadership.

Our source said the past Chairman succeeded in coopting three past Chairmen of the branch to frustrate the present administration but have always been resisted by members of the branch who are comfortable with the leadership of Mr. Adikwaone

Highlighting some of the failed attempt, by the past Chairman and his cronies, our source who said he is a concerned member of the branch said:

“First, they attempted to impeach the Chairman Mr. Adikwaone and we resisted them. They attempted severally and we resisted them at every step. So the past Chairman then resorted to publishing falsehood against Mr Adikwaone. As I speak to you, Mr. Adikwaone has caused his lawyers to write to the past Chairman demanding a retraction of his libelous publications or risk being sued. I will email you a copy of the letter if you want to see.”

Continuing with his narratives our source stated: “there are only five members of the branch orchestrating trouble in the branch because some NBA Leaders still consider the NBA as their meal ticket.”

“The past Chairman wanted to continue as the Branch NEC representative and the members refused. He was rightfully disqualified and then he again indicated interest to run for a National Office during the NBA National Election. Why will someone go all out just to be elected at all cost” He asked.

He further revealed that all that the past Chairman and his cronies are interested in, is to destabilize the branch. “They have written petition, five of them wrote to the NBA National alleging that the Electoral Committee of the Branch are not transparent.”

“Now the National Secretary Mr Isiaka Abiola Olagunju has written to the Chairman of the Branch directing us not to hold the scheduled election. Copy of the letter will be sent to you if you want to see’

“This is not right at all. And If I may ask, does the NBA National Secretary have the power to stop us from conducting our branch election?” He asked.

As at the time of publishing this, DNL Legal & Style has made several failed attempt to reach the Chairman of the branch.

Whatever be the case, the stage is set for more intrigues as we wonder why there is so much ado about serving in NBA if the true intent is to serve.

Attached are the copies of the petition written by the Lawyers to the NBA Ikorodu Chairman as well as the  letter signed by the National Secretary directing that election processes in Ikorodu NBA branch be halted. 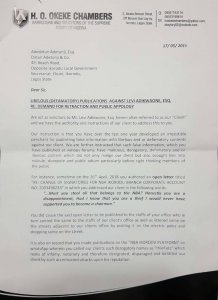 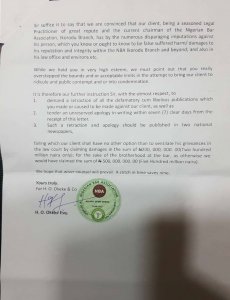