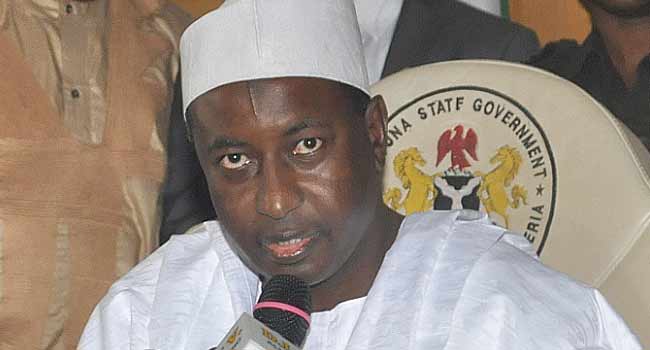 A Federal High Court sitting in Kaduna has remanded a former governor of Kaduna State, Mukhtar Yero, and three others in prison.

Justice Mohammed Shuaibu gave the remand order on Thursday, following the arraignment of the defendants by the Economic and Financial Crimes Commission (EFCC).

Mr Yero and the other defendants were charged with four counts bordering on money laundering, criminal conspiracy, misappropriation of public fund, and breach of trust.

Others charged alongside the former governor are a former Minister of State for Power, Nuhu Wya; a former Secretary to Kaduna State government, Hamza Ishaq; and a former chairman of the Peoples Democratic Party (PDP) in Kaduna, Haruna Gaya.

They, however, pleaded not guilty to the charges when they were read to them.

Counsel to Mr Yero, Yunus Ustaz, subsequently made an oral application for the bail of his client or worse still be remanded in EFCC custody.

His oral application was, however, opposed by the EFCC counsel Joshua Saidi who insisted that the four accused persons be taken to prison, as the Commission does not have enough detention facility to accommodate them.

Giving in his ruling after listening to both arguments, Justice Shuaibu agreed with the submission of the prosecuting counsel and, therefore, asked the defence counsel to file a written application for bail.

He also ordered that the four accused persons be remanded in prison custody till the next sitting.

The judge then adjourned the case till June 6, for ruling on the bail application.

Meanwhile, some purported supporters of the embattled former governor have protested against the ruling of the court.

They gathered in front of the court premises in solidarity with Mr Yero whom they claimed was innocent of all the allegations levelled against him.

They were asked to explain the various roles they played in the distribution of the campaign fund meant for the state in the buildup to the 2015 general elections.

The anti-graft agency later released them after hours of interrogation.

However, the three men, as well as the former minister, were detained at the EFCC zonal office in Kaduna on Wednesday.

The spokesman for the zonal office Kamaludeen Gebi had told Channels Television that the four accused persons would be arraigned in court on May 31.