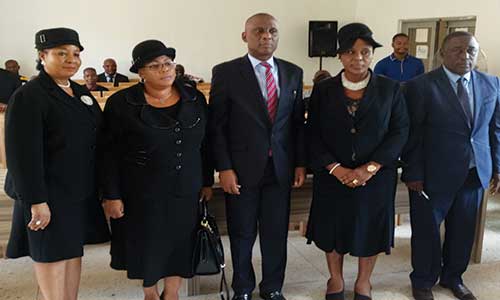 At the High Court level, Justice Patience Onajite-Kuejubola will sit as chairman in Warri, while Hon. Justice Cordelia Ogadi and Joshua Edun shall preside over cases in Agbor and Ughelli.

While constituting the Family Court, the State Chief Judge, Justice Marshal Umukoro cited section 143 (1)(2) of the Delta State Family Court Law, which spelt out its Jurisdiction to include to hear and determine any civil proceedings in which the existence or extent of a legal right, power, duty, liability, privilege, interest, obligation or claim in respect of a child is in issue.

Speaking further, Justice Umukoro told the members that their jurisdiction also covers any criminal proceedings involving or relating to penalty, forfeiture, punishment or other liability in respect of an offence committed by a child or against the interest of a child, even as he charged them to be guided by the principle of conciliation.

He further encouraged them to facilitate the settlement of matters before it amicably.

“Appeals would lie from the Magistrate Court to High Court, and on to the Court of Appeal.

“With the constitution of the Family Court, those who desire to adopt children must have recourse to the Court to verify their identity,” Chief Judge said.

Responding on behalf of the members of the newly instituted Family Court, Honourable Justice Onajite-Kuejubola thanked the Chief Judge for finding them worthy and competent for the job. She prayed God for divine wisdom to conduct their affairs properly, even as she promised not to betray the confidence reposed in them.