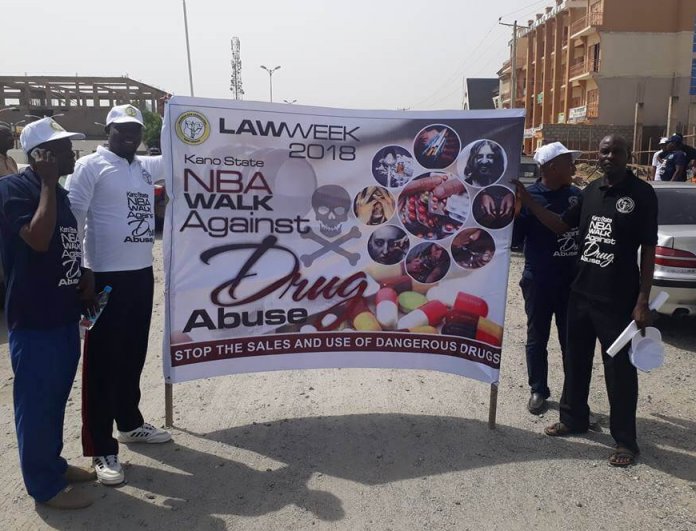 The Nigerian Bar Association, (NBA) Kano branch, has said that practitioners intending to join the association would henceforth undergo drug tests to ascertain their mental fitness.

Disclosing this, on Saturday, in Kano, the state chairman of NBA, Mohammed Inuwa Musa, during a programme tagged: Kano State NBA Walk Against Drug Abuse, as part of activities marking the 2018 NBA Kano Law Week,  said within the shortest time from now, drug tests would form part of the condition to be fulfilled before being admitted into the branch.

The lawyers, who walked from their office located at Farm Centre, a distance of about five kilometres to the Emir of Kano’s palace, said the walk was to demonstrate their anger against drug abuse.

According to him,  legal practitioners who indicate their intentions to be admitted into  NBA Kano will undergo urine and blood tests to ascertain if they are free from the abuse of banned substances.

Mohammed said Kano NBA would liaise with the National Drug Law Enforcement Agency, NDLEA, to draw up mechanism on how to pursue the implementation of the drug tests on prospective applicants.

He decried the worrisome menace of increase in the abuse of hard drugs, stating that Kano NBA was is in support of the decision by the Federal Government to ban the importation of codeine into the country.

Also during the event, the Emir of Kano, Mallam Muhammadu Sanusi II, commended the legal practitioners for staging the walk.

He said it was timely, adding that the exercise would sensitise the public on the ills caused by indulging in the consumption of banned substances.

The commander, NDLEA, Kano command, Alhaji Hamza Umar revealed that the types of drugs being abused in the ancient city were those produced for medical prescription, adding that this singular factor has turned the fight against drug menace into a complex responsibility.

Mental Wellbeing in the Legal Profession: Take the IBA Survey