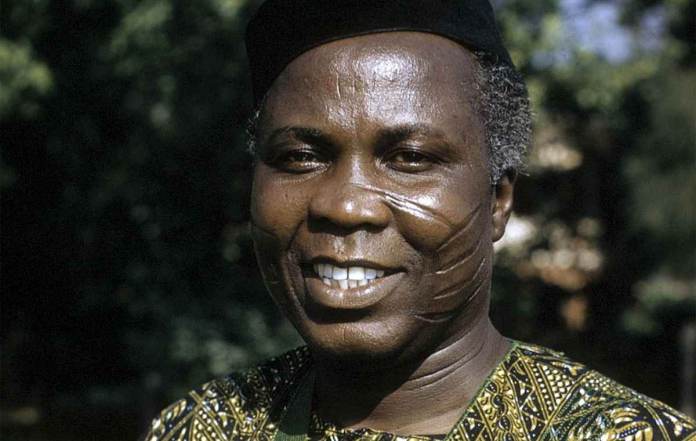 Justice Aderonke Aderemi of the Oyo State High Court on Thursday granted the prayers of an Oyo state judge, Justice Ladiran Akintola by declaring him a biological son of the late Premier of the old Western Region, Chief Samuel Ladoke Akintola.

The court by the decision also ruled that Justice Akintola is therefore entitled to a share of the estate of the deceased Premier.

Akintola had approached the court by filing a suit against his half siblings; Chief Abayomi Akintola and Dr Abimbola Akintola, asking that the court declare that the letter of administration being used by his siblings and the one earlier given to his stepmother, Late Faderera Akintola as null and void.

Delivering a judgment which lasted for about three hours, Justice Aderemi in the suit which had earlier been heard before Justice S.A. Akinteye and Justice N.A. Esan held that Justice Akintola had led sufficient evidence in the matter and had entered judgment in his favour.

The court declared as null and void the letter of administration issued in 1968 on the estate of Late S.L Akintola by the Western Nigeria High Court of Justice  under Faderera Akintola and Abayomi Akintola on the ground that it was obtained by fraud and concealment of interest in a manner that is inimical and discriminatory against Justice Akintola.

Also, the court declared as null and void the letter of administration issued in October 2007 on the estate of Late S.L Akintola by the Oyo State High Court of Justice under Abayomi Akintola and Abimbola Akintola on the ground that it was obtained by fraud and concealment of interest in a manner that is inimical and discriminatory against Justice Akintola.

The court further held that Justice Ladiran Akintola and the six claimant’s witnesses has led enough evidence to his paternity and ruled that he is the biological son of late S.L. Akintola and is therefore entitled to a share of his estate.

Further, she mandated that the detailed account of the estate be submitted within a month of the judgment and gave an order of perpetual injunction mandating Abayomi and Abimbola Akintola from administering the estate of S.L. Akintola or undertaking any activity on behalf of the estate until the new letter of administration is issued.

In the course of the trial, the defendants had filed a Notice of Preliminary Objection asking for an order dismissing the suit on the ground of Section 17 of the Limitations Law of Oyo state and arguing that the time prescribed by law to contest the estate of a deceased had lapsed as the case was filed 47 years after the death of their father contrary to the 10 years provided by law.

On the issue that Justice Ladiran does not have the locus standi to sue as a beneficiary in the matter of the estate but the court also ruled that he had locus standi.

The court further held that the refusal of the first defendant to testify after the defense had opened its case is tantamount to an admission of the claimant’s allegation, adding that it is wrong for the defense to withhold a proof that it had earlier said it had even when the claimant asked for same.

“It is regrettable that the defendants refused to produce the red diary which the defense claimed contains the record of birth of all children of Late S. L. Akintola even when it was served with court notice to produce same by the claimant, this according to the law reflects that the defense withheld the evidence because it found it will be unfavourable to its case,” the court held.

Counsel to Justice Akintola, Abiodun Abdulraheem further applied to the court that it is entitled to cost after expending so much energy and resources in gathering evidence and resources including an 83-year-old man who was the secretary to Late Ladoke Akintola when he was a Premier.

“The defendants filed 12 applications which were all resolved in favour of the claimant and we spent five years on this trial within which we lost a lawyer on our team. I will be asking for a cost of N100, 000 for the application dismissed this morning and N200, 000 for the main case,” Abdulraheem said.

The court consequently awarded the cost of N200, 000 as cost against the defendants.

A judge of the High Court of Oyo State, Ibadan Division, Justice Ladiran Akintola, had in 2013 approached the court seeking to be declared the biological son of the late premier, who was one of the founding fathers of modern Nigeria.

S.L. Akintola was assassinated in Nigeria’s first military coup d’etat of January 15, 1966 led by the late Major Chukwuma Kaduna Nzeogwu.
The suit, marked No I/451/2013 and filed at the state High Court, was previously pending before Justice S.A. Akinteye for pre-trial conference before it was assigned to Justice Eni Esan.

[Download] Ruling of Court of Appeal Ordering Parties to Maintain...