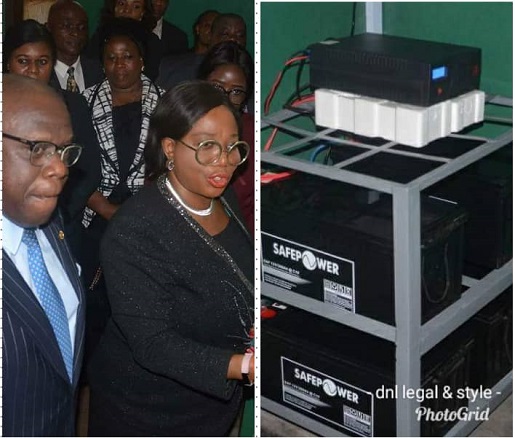 The pilot phase of the new power source, the first of its kind in all judicial divisions, was inaugurated at the Chief Magistrate Court, Yaba today by the Honourable Chief Judge.

Four of such power plants were installed to service the four court rooms, the magistrates’ chambers and other offices within the court complex.

“Our magistrates can now sit for longer hours and be more productive because as long as there is light, the court rooms will be cool for them to work in” she said. Justice Oke noted that the new power source would help reduce overhead cost and enhance power usage.

She said that in no distant future, solar energy power source would be deployed to  the courts in all the judicial divisions of the state.

She remarked that the fact that the State Attorney General, Adeniji Kazeem flew in on Sunday night from Japan to be part of the event underscores the importance that the government attach to efficient and effective justice delivery in the state.

“Lagos is the first to do this. We are thinking of a smart city, without a smart city, nothing can work.  We are moving towards a cleaner energy source that has no emissions”, she noted.

It is our hope that this will end the electricity crisis in Lagos Courts.

“The Practice of Law is Not a Right but a Privilege...

Lagos State to be the Safest Place to Live, Work and...