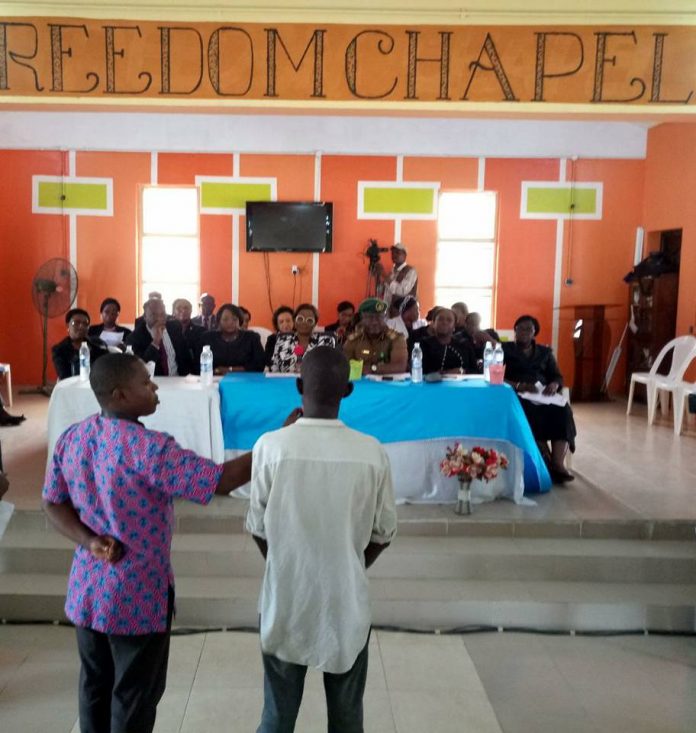 The Chief Judge of Lagos State, Honorable Justice Opeyemi Oke Tuesday pardoned one Lucky Nelson, an inmate of Kirikiri prisons suffering from Tuberculosis. Nelson who has been in prison custody since 2012 over allegation of obtaining money by false pretense is also diagnosed of diabetes.

Exercising her power to grant amnesty, Honorable Justice Oke who was at the prison to free some deserving inmates, freed him on compassionate ground. “…pursuant to the provisions of Sections 1(1) of the Criminal Justice (Release from Custody) Act, 2007 as well as Section 35 of the 1999 Constitution,  you, Lucky Nelson is hereby released from prison custody today February 20, 2018. I want you to go out there, be of good behavior and sin no more”, she said.

The Chief Judge could not however release about 14 inmates of Kirikiri Medium Prisons whose cases were forwarded to her, because all of them failed to meet the criteria for pardon.

Similarly, about 10 nursing mother inmates of the Kirikiri Female prisons failed to meet the criteria for release during the visit by the Honorable Chief Judge.

She later told newsmen that the purpose of her visit is not just to release inmates but to ensure that any inmate released deserves to released. “14 cases were presented to me for consideration but after interviewing them, I found that none of them merited to be pardoned. It is very unfortunate but we must follow due process in releasing any inmate in the prison. Remember that members of the society must also be protected so we don’t just free any inmate without following due process,” she said.

Earlier, the Deputy Comptroller of Prison, DCP Oluwaniyi Emmanuel of Kirikiri Medium Prison, called on Lagos State Government to reverse its increment on fine stipulated by the State Task Force Mobile Court saying it has contributed to overcrowding of the facilities. DCP Emmanuel, who pointed out that most of the minor offender inmates in their facility are referred by mobile court, therefore seeks for the support of the State Government to provide them with buses to aid transportation of inmates to their respective court.

In her remark, Honorable Justice Opeyemi Oke assured the prison authorities that prison decongestion is one of the key programme of the Ambode Administration.