With seasoned moderators and panelists, discussions centered on equipping the 21st century lawyers  The Technical Sessions began on a very high note with speakers and delegates emphasizing on the theme of ‘Human Capital & the Legal Profession in the 21st Century.

The event began with a welcome address by the Chairman of the Branch, Mr.  Chukwuka Ikwuazom’s welcome address. He disclosed that the choice of this year’s theme, ‘Human Capital & the Legal Profession in the 21st Century,’ was in recognition of the fact that the global political economy as a whole was in the throes of a technological revolution which would not leave any field of human endeavor – let alone a field as crucial in human affairs as law – untouched. The onus, therefore, was on lawyers and law establishments to step up to the plate and maximize the opportunities offered by this intrusion of cutting-edge technology into their work – or risk dwindling into irrelevance in a world where the boundaries between the physical, digital and biological spheres are being blurred with every passing day. A world defined by artificial intelligence, robotics, Fintech, autonomous vehicles, Blockchain, and so forth, he said, will demand new and different skill sets from lawyers – skills that must be invested in and developed by law firms and individual lawyers themselves.

The Lagos branch’s monthly Knowledge Sharing Sessions, Ikwuazom added, were just one example of the branch’s determination to develop the requisite skills amongst its members. It is an effort, he promised, would continue into the future.

The committee’s emphasis on health and wellness at the beginning of this year’s Law Week activities, Oshobi said, was in recognition of the need for all lawyers to maintain a high level of physical, mental and psychological health with a view to performing to their utmost.

The Chief Judge of Lagos State, Honourable Justice Opeyemi Oke represented by Justice Onigbanjo in his goodwill message expressed satisfaction over the relationship that exist between the bar and the bench in Lagos State. He noted that the collaboration will be strengthened to ensure that the Judiciary is moved to a greater height. He further said that Lawyers in Lagos State are among those that practice within international best standards and are keying into the move by Lagos state judiciary to completely digitalize the Lagos Court system. 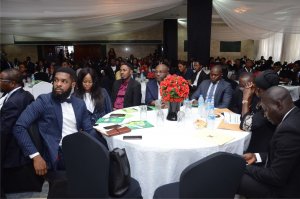 The Governor of Lagos State, Mr. Akinwunmi Ambode represented by the Attorney General of Lagos, Mr. Adeniyi Kazeem  in his goodwill message  emphasized the importance of human capital development and further advised that technological advancement should be the focal point of every judicial activities. He noted that refusal to embrace and keep pace with technological advancement would only make a lawyer at best a “Local Champion”

Delivering the keynote address, Mr. Yemi Candide-Johnson, SAN, gave an insightful details into how technological advancement has affected legal practice and development. He explored the intersecting between legal profession and technology, and the impact of the later on legal practice. He noted that Lawyers can no longer afford to resist changes occasioned by disruptive technologies. He emphasized that human capital and technology work hand in hand to provide  business model that is market-oriented, client-focused and dedicated to the welfare, security and growth among their people.

Candide-Johnson SAN noted that technological advancement have occasioned a paradigm-shift in legal services highlighting some of the most critical skills a 21st century lawyer/law firm must have to survive as collaboration; emotional intelligence; financial literacy; project management skills; technological affinity, and time management, among others.

The third technical session of the day with the theme, ‘The 21st Century Young Lawyer’ was moderated by Yimika Adesola, a corporate lawyer and associate with the law firm of Aluko & Oyebode and had Prof. Ayodele Atsenuwa, a law lecturer at the University of Lagos and a strong advocate of law reform in Nigeria; Mr. Babajimi Ayorinde, a commercial lawyer and head of the dispute resolute at the New Practice, an innovative Lagos-based law firm; Mrs. Margaret Kukoyi of the law firm of SP Ajibade & Co; Mr. Rotimi Ogunyemi, an ICT attorney; and a representative of Dr. Oladapo Olanipekun, SAN as panelists.

The final session of the day was an interface between the NBA and officials of the Lagos State government – specifically from the state’s land bureau, the internal revenue service, the land use charge office, and the state ministry of lands and urban planning – to discuss some contentious issues that have seen lawyers and their lawyers and their clients engagement these ministries in respect of contentious issues.

Each Session had question and answer segments where delegates had the opportunity of asking questions on issues raised during the panel discussion.