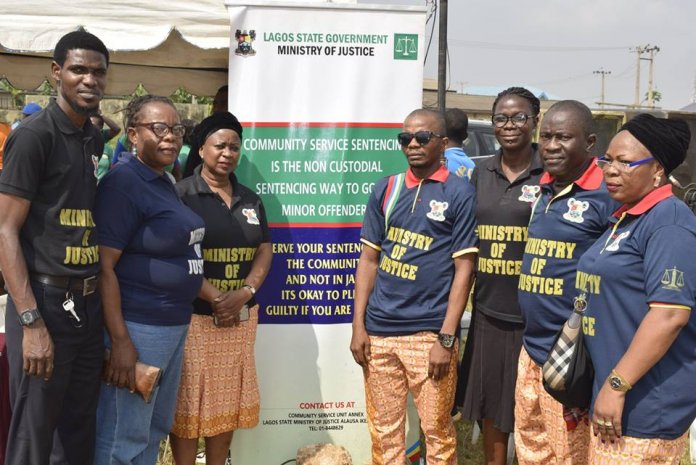 The Lagos State Ministry of Justice in a bid to sensitise and bring justice closer to all residents in the State has gone a step further by enlightening residents at the grassroots of the benefits inherent in the justice sector.

The enlightenment campaign was carried out at the 30th anniversary of Igbogbo Day celebrations in Igbogbo, Ikorodu, where the ministry organised a legal clinic with all its departments and agencies present to offer legal services and advice to the the people.

The leader of the delegation and director in the department of Administrator General and Public Trustees, Mrs. Mariam Olaniyi admonished residents not to resort to self help but avail themselves of the opportunity provided by the State Ministry of Justice to settle their grievances.

She noted that the State Government has put modalities in place to assist the people in accessing free legal services across the State. She added that ” there are several windows available to access justice free of charge as government through its agencies is ready to provide succour to the indigent residents in Lagos State”.

According to her, agencies and directorates such as the Administrator General and Public Trustees (AG&PT), Public Advice Centre (PAC), Office of the Public Defender (OPD), Citizens’ Mediation Centre at (CMC), Citizens’ Right, Domestic and Sexual Violence Response Team (DSRVT), Taskforce on Land Grabbers, Lis Pendis and the Community Service are institution funded by taxpayer’s money to harness peaceful coexistence among residents in the State.

Olaniyi commended the Oba of Igbogbo, Oba Kasali Semiu Adegboroye of his immense effort at partnering with the Ministry with a view to educating his people more in the area of justice delivery.

Further to this, Olaniyi hinted that the legal clinic at reawakening the general public about the free legal services of the ministry which cuts across the rights of women, children, the less privileged, the vulnerable and persons living with disabilities and to further sensitize them on new laws enacted by the Lagos State government to preserve their rights.

In his remark, the Oba of Igbogbo, HRM Oba Kasali Semiu Adegoroye commended the State Government for providing avenues where residents can settle their disputes and obtain free legal services without fear or favour.

He advised the Igbogbo community and it’s environs to seize the opportunity provided by the State Ministry of Justice as government is committed to accommodate the grassroots in its developmental plans of which access to justice is one of them.

Amasa Firdaus, Speaks, Says No Law Prevents the Use of...