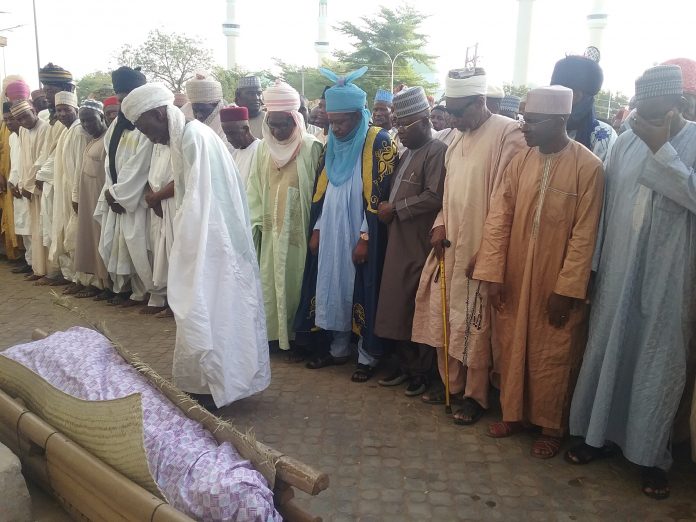 The remains of the late Justice Auwal Ibrahim was buried yesterday February 27 at his home town Azare town of Bauchi State.

A mammoth crowd turned out to pay their last respect to the judge who was described as an intelligent and astute jurist. Until his death, Justice Auwal was the Presiding Judge of the  National Industrial Court (NIC), Port-Harcourt Division.

The President of the court, Hon. Justice B. A. Adejumo OFR led other judges to honor the late jurist. They sympathized with his entire family, katagum Emirate; Azare Community, the good people of Bauchi State and Nigeria in general over the demise of the late eminent and resourceful jurist.

“We have accepted it as destiny, but it was indeed a painful loss to us, Judiciary and Nigeria in general. We Pray Allah to forgive the deceased his entire shortcomings and grant him highest paradise”. Justice Adejumo said.

Commenting on the life and time of the late jurist, Mr. Lele Mohd said it is certainly a mourning period for the people of Azare (Bauchi state) as they lay the remains of one of their illustrious son Honourable justice Auwal Ibrahim (PhD).

According to him, those who knew Dr. Auwal (As he is fondly called) humility was his greatest asset and simplicity his second name. While highly placed individual chose to associate with their fellow prominent big-shots late Dr. Auwal despite his prominence chose to be identified with the downtrodden. He sits with them, eats with them, listens to them and also extends his helping hand to them.

“He is such a man that abandons his retinue of aides and convoy to use okada when visiting friends and family. I know of many people that used to call the late jurist for financial assistance while in school and the next thing they receive is alert.” “He carries everybody along without selection.” “No amount of words can adequately describe who Dr. Auwal was. I join thousands of people to condole with the family of late Dr. Auwal, his students, Katagum emirate and Bauchi state at large.” We join the NIC to pray as follows: “May Allah grants Dr. Auwal highest paradise. May Almighty Allah overlook all his entire shortcoming. May Allah give the family, NICN, judiciary, and Nigeria in general the fortitude to bear the infinite loss.

May the soul of Honourable Justice Auwal Ibrahim (PhD) Rest in Peace.