A lawyer and public affairs analyst, Sunusi Umar Sadiq, has filed a N5million suit against a lecturer at the Kano State Polytechnic, Aisar Fagge, at the Kano State High Court for allegedly defaming his character.

Mr Sadiq, a Daily Nigerian columnist, sought an order compelling Mr Fagge to pay N5million damages and N500,000 as cost of instituting and prosecuting the suit.

The feud between the duo began shortly after the announcement of the death of famous Tijjaniyya leader, Khalifa Isyaku Rabi’u.

Writing on his Facebook timeline, Mr Sadiq said prayers for Allah’s mercy being made for the soul of the late Sheikh was a clear indication that something was wrong with the way Muslims in a particular part of the country excommunicate and push anyone other than them outside the fold of Islam, only for such Muslims to start praying for the repose of the souls of the very people they used to excommunicate.

Mr Fagge then replied the lawyer in a post on his timeline, saying that Mr Sadiq was stupid, adding that he was creating disunity among Muslims.

He therefore undertook to write something scathing about the lawyer.

True to his promise, Mr Fagge made a post, asserting that Mr Sadiq was rascal, and that he (Mr Fagge) is imploring Allah to heal Mr Sadiq — using a Hausa expression that imputes insanity.

In his claim against the defendant, the plaintiff therefore seeks the court to declare that the Defendant’s assertions that the Plaintiff is rascal and stupid, in his of Facebook posts of 9th and 10th May 2018, as well as the several comments and replies associated therewith, is defamatory to his character, and injurious to his personal and professional reputation.

He further seeks the court to declare that Mr Fagge’s statement of ‘Allah Ya baka lafiya’ (literally meaning ‘may Allah heal you’) in his post of 10th May 2018 was an imputation of insanity to him and is therefore defamatory and injurious to his personal and professional reputation.

Mr Sadiq seeks an order of the court compelling Mr Fagge to retract and withdraw his defamatory statements contained in his Facebook posts of 9th and 10th May, 2018 and the several comments and replies associated therewith against him by making a post(s) to that effect and submitting a written apology to him.

In his statement of claim, Mr Sunusi said “he makes posts, when the occasion  demands, on Facebook exposing the disservice such sects, associations and groups do to the religious psyche of their followers, which in turn strain not only the relationship between Muslims and non-Muslims in the country, but even among the Muslims inter se. An example of such post together with the Defendant’s testimony as to that aspect of the Plaintiff’s stand on such issues are hereby pleaded and will be relied upon at the trial.”

The case comes up on October 15 for mention.

Meanwhile below are the posts made by the Defendant on 9th and 10th May that has earned him a N5m suit. 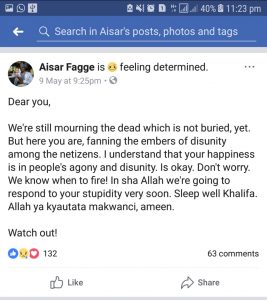 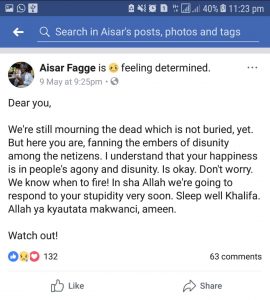