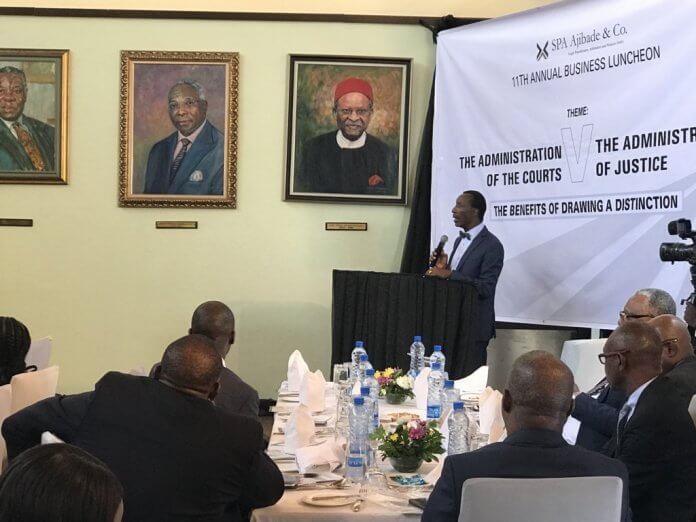 Worried by the inherent problems in the judicial system, stakeholders are mooting the idea of a split between justice sector administration and court administration.They believe such separation would make the judges concentrate on the issue of quick justice delivery, while others handle the administration matters.

“I think that our judges are over burdened. They are been asked to do things that they are not either trained for or they do not have the capability or the resources to do. And these are the issues bedeviling the administration of justice.

“There is a general consensus that things are not working properly and this is just another attempt to try and find solutions,” he said. He believes that perhaps if judges are freed from the burden of managing the administrative affairs of the court, they would have time to attend to more cases, thereby enhancing the speed of justice delivery.

The lead speaker, Mr Fola Arthur-Worrey, a former Solicitor-General in Lagos State, said the failure to make a clear distinction between justice administration and court administration had for so long hampered the efficiency of the justice system.According to him, Nigeria should emulate the United States of America, the United Kingdom and South Africa, where the two components of the justice system have been separated.

“Things like power supply, generators, diesel etc should not be the concern of judges. But today, judges are the ones that basically manage their courts. They are the ones that replace bulbs etc, because the system is just not fast enough to catch up.“I know for instance that many judges don’t have competent secretaries. They are typing their judgments themselves and it has got to a stage that it is an expectation but it’s not supposed to be.

“All you require from a judge is his or her intellectual capacity, understanding of the law and a level of efficiency in applying the law.”
Oyo State Attorney General and Commissioner for Justice, Mr Oluseun Abimbola, said where the executive was even willing to allow the judiciary enjoy financial autonomy, there was no structure in place to achieve it.

But Mr. Babatunde Fagbohunlu (SAN), argued that much as the idea of creating a clear dichotomy between justice administration and court administration sounded beautiful, it might do little to address the problem of delayed justice if there were no change of orientation among the stakeholders in the court.

Fagbolunlu described the problem of delayed justice in the court as a reflection of the falling values of the Nigerian society.His words: “If there is one lesson I have learnt, the problems lie with us, not the rules. The judges, the lawyers, the court officials and it even go beyond those to the leaders of this country, those who are responsible for implementing the constitution.”

Justice Abimbola Obaseki-Adejumo of the Court of Appeal, who stood in for Justice Sidi Bage of the Supreme Court, as the chairman on the occasion, lamented the piecemeal release of the judiciary budget by the executive.She stressed that the kind of accommodation being provided for judges now were not suitable.To make justice delivery more efficient, Justice Obaseki-Adejumo advocated more use of technology and continuous training for the court support staff.