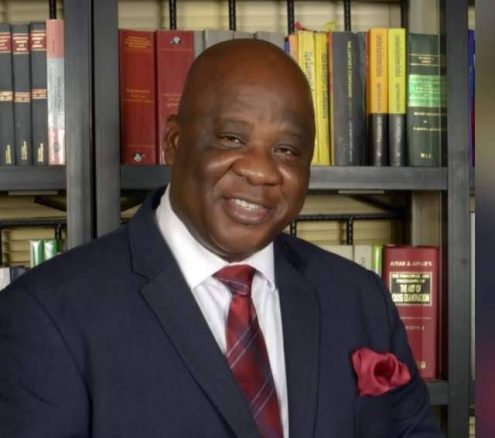 OLUBOWALE TAIWO, known to many simply as Chief Wale Taiwo, is the Principal Counsel at Wale Taiwo & Co., a top tier litigation law firm based in Lagos and working out of offices in Abeokuta and Abuja, Nigeria. He was born in Ebute-Metta, Lagos on 6th June 1960 to the family of Isaiah and Dorcas Taiwo, both now of blessed memory. He attended U.N.A Primary School, Ebute Metta, Lagos from where he earned his First School Leaving Certificate in 1973 and subsequently proceeded to Anglican Grammar School, Igbara-Oke, Ondo State, where he obtained his O’ Levels in 1978. During school holidays, his love for the law was birthed during his secondary school years as he always interned at the law firm of Oladipo Opanubi & Co.

Between 1978 and 1979, Wale worked as a library officer at the Cabinet Office at TBS, Lagos where he acquired library services skills setting him up for legal practice. Between 1979 and 1981, he enrolled for his Higher School Certificate programme (A’ Levels) at the prestigious Baptist Academy, Lagos subsequent to which he gained admission to the prestigious Faculty of Law, University of Lagos where he was a student from 1981 to 1984. He was a member of the Vice Chancellor’s Committee set up to probe allegation of a gun running ring at the University of Lagos in 1983.In August 1985, he was called to the Nigerian Bar at the Supreme Court of Nigeria.

During his National Youth Service Corps year, Wale joined the law firm of Adesanya & Adesanya where he became responsible for the management of the firm and the handling of the firm’s matters. Within a short period of time, coupled with hard work and determination, Wale was able to garner enough experience to competently handle cases on his own. He served with Adesanya and Adesanya until 1988 and then returned to his alma mater, University of Lagos for a Master’s degree in Law which he completed in 1989.

After his LLM programme, Wale was introduced to the renowned business mogul, Chief Gabriel Osawaru Igbinedion, the Esama of Benin Kingdom and became responsible for the legal affairs of Okada Group of Companies. Within three years of self-determination, drive and strength of character, Wale rose to become Company Secretary/Legal Adviser to Okada Group of Companies before he established his own chambers, the now full-fledged Wale Taiwo & Co. in 1991.

Wale Taiwo & Co. modestly started out at 92, Murtala Mohammed Way, Ebute Metta Lagos through to Lapal House, Igbosere which was razed by an inferno in June 2002. Years of Wale’s hard work suddenly became unaccounted for by that fire. However, the unfortunate event did not deter him, especially with the support of family and friends, as he rebuilt his practice from scratch to what it has become today in its present offices in Magodo GRA II, Lagos. The firm has been able to carve a niche for itself in areas including Commercial and Corporate practice, Real property litigation, Banking and Debt recovery, Family law and Probate, among others, and has garnered reputation for its appellate litigation practice. His firm’s contributions to the development of the law are reflected in many decided cases, a few of which are:

Wale is a core Bar man. He is of the Lagos (Premier) branch of the Nigerian Bar Association (NBA) where he has served as Chairman of the Welfare Committee in 2014. He is a member of the NBA Section on Business Law, Business Recovery and Insolvency Practitioners Association of Nigeria (BRIPAN) and the International Bar Association (IBA), among others. He sits on the IBA Law Firm Management Committee and is a leading figure in the IBA African Regional Forum where he sits on numerous committees. He is a Notary Public and has numerous publications and conference presentations to his credit. In July 2018, the Legal Practitioners’ Privileges Committee (LPPC) recognized his contributions to law by conferring him with the rank of Senior Advocate of Nigeria (S.A.N). Wale breathes and lives the law. Nothing gives him greater satisfaction than giving lucid exploratory discourse on law and legal issues. Over the years, his devotion to Commercial and Corporate law practice has garnered him recognition as an outstanding legal practitioner.

Outside of the law, Wale served and continues to serve on several Company Boards including Shelters Properties (Nigeria) Limited and the defunct Destiny Insurance Company Limited now, Regency Alliance Insurance PLC. He volunteers as the Chief Legal Adviser of the Cherubim & Seraphim Unification Church in Nigeria while serving as the Elder-in-Charge/G.O of his local church – Hope of Everlasting Glory Church, Akoka Lagos. He once served as Chairman of Mainland Executive Club and he is a member of the prestigious Island Club, Lagos where he is recognized as a Knight Commander of the Order of the Peacock (KCOP), Abeokuta Club, and the Prime League. In 1997, he was installed as Ba’mofin of Ikosi/Kosofeland, Lagos by HRM the Late Oba Adegboyega Bamgbade Taiwo in recognition of his contribution to his local Magodo/Shangisha community. Chief Wale Taiwo is a silent philanthropist of note.

He is married and blessed with many children (both biological and adopted), two of whom are Lawyers. He is an avid wide reader and loves listening to music and playing table tennis.