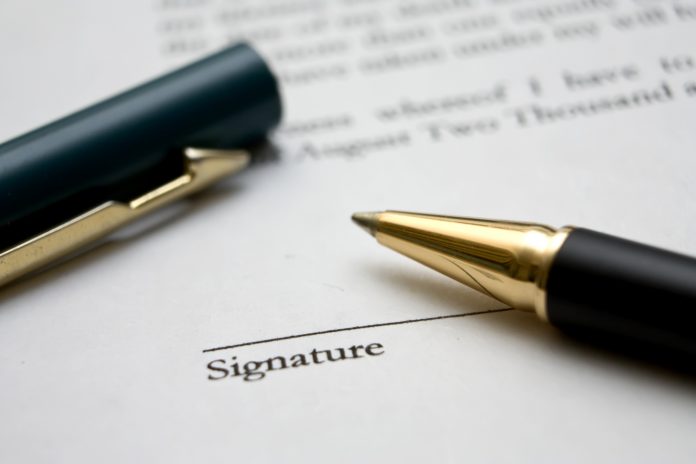 Letters of intent has caused many problems for parties and it is something that should be approached with great circumspect and care.

The moral of the story from the decision of the Supreme Court (which replaced the House of Lords as the court of final appeal) is to agree the terms of contract first and start work later.

The decision at first instance – there was a contract

The judge held that after the expiry of the LOI – when the parties continued negotiating the MF/1 terms – the natural inference was that:

The judge had concluded that the MF/1 terms did not apply because:

The importance of the MF/1 terms was that they contained detailed provisions on many matters including limitations of liability and liquidated damages provisions.

The decision of the Court of Appeal

The Court of Appeal had to decide whether:

The Court of Appeal held that the judge’s conclusion that there was a contract on limited terms resulted in the “extraordinary result” that the court had rejected in the British Steel Corporation v Cleveland Bridge and Engineering Co Ltd [1984] 1 AII ER 504.

Further, the Court of Appeal held that the effect of clause 48 of the MF/1 terms was to prevent any contract from coming into existence between the parties (not just a contract incorporating the MF/1 terms).

Accordingly, the Court of Appeal held that there was no contract between the parties after the LOI expired.

The issues before the Supreme Court

The issues before the Supreme Court were:

Was there a contract between the parties: the legal principles

The Supreme Court noted that the general principles were not in doubt. Whether there was a binding contract between the parties depended not upon the parties’ subjective state of mind but on a consideration of what was communicated to them by words or conduct and whether that led objectively to a conclusion that they intended to create legal relations and had agreed on all the terms which they regarded or the law regarded as essential for the formation of legally binding relations. If certain terms of significance to the parties had not been finalised, an objective appraisal of their words and conduct might lead to the conclusion that they did not intend agreement of all such terms to be a pre-condition to a concluded and legally binding agreement.

These principles were set out in the authorities reviewed by the Supreme Court including the British Steel case (which featured prominently in the Court of Appeal but had not been put before the judge). The authorities confirmed that:

Pagnan SPA v Feed Products Ltd [1987] 2 Lloyd’s Rep 601 – determining whether a contract had been concluded in the course of correspondence as well as by oral communications and conduct involved a consideration of the parties’:

Agreement of all terms was not necessarily a precondition to the conclusion of a contract – minor details could be sorted out later once a bargain was struck.

In cases which are “subject to written contract” the question which should be considered was: despite the fact that the parties may initially have required that any agreement they conclude was not effective until they have entered into a formal written contract, have the parties waived reliance on this earlier understanding through their communications and/or conduct during the course of negotiations? This question depended on all the circumstances of the case.

The decision of the Supreme Court

The Supreme Court considered that there were three possible conclusions which could be reached and addressed each in turn, namely:

The Supreme Court agreed with the judge that it was unrealistic to suppose that the parties did not intend to create legal relations.

This was tested by asking whether the price for the works was agreed – both parties agreed that it was. Therefore, the agreed price of £1,682,000 must have formed part of a contract between the parties. As the LOI had expired, the contract containing the price must have been contained in some agreement other than the expired LOI and it could not on conventional principles be a case of no contract.

The Court of Appeal’s decision that there was no contract between the parties involved holding that there was no binding agreement as to price or anything else and that evidence of the agreed price was no more than evidence of what a reasonable price would be on a quantum meruit basis. This was not correct for the following reasons:

The Supreme Court concluded that Conclusion 1 was not convincing. Moreover, it involved the contractor agreeing to proceed with detailed work and to complete the whole contract on a non-contractual basis subject to no terms at all.

Conclusion 2: contract on the terms found by the judge

The Supreme Court agreed with the judge that the parties initially intended that there should be a written contract between them which was to be executed by each and exchanged between them.

If this position was tested on 5 July 2005, the correct conclusion might well have been that based on the facts there was no binding agreement not because the parties had not reached agreement on all the essential terms but because the agreement they had reached was at that point still “subject to written contract”.

However, the striking feature of this case was that – essentially all the terms of contract were agreed between the parties and substantial works were carried out – but the agreed contract terms were subsequently varied by the parties in important aspects.

The parties treated the agreement to amend the delivery plans for the project on 25 August 2005 as a variation of the agreement that had been reached by 5 July 2005. Neither suggested that there was no contract and thus nothing to vary. It was only when the parties were in dispute that arguments arose as to whether there was a contract or not.

The Supreme Court was of the firm view that the parties’ written communications and actions by 25 August led to the conclusion that they had agreed that the contractor would perform work and supply materials on the terms agreed between them up to 5 July, as varied by the agreement of 25 August 2005. It did not make commercial sense to hold that the parties were agreeing to the works being carried out either without any relevant contract terms or on some but not all the terms agreed by 5 July 2005.

Conclusion 3: contract was wider than that found by the judge

The Supreme Court held that:

The second issue was: did the parties depart from the understanding that the agreement which they were negotiating was to be subject to a written contract, as had been the original understanding of the parties and as expressly provided in clause 48?

The Supreme Court accepted that no formal contract was ever signed or exchanged between the parties, so that, unless and until the parties agreed to vary of waive clause 48, the contract would not become binding or effective.

However, although the Court of Appeal considered that it would need a “clear express variation” of clause 48 before it could be said that a contract was concluded between them, the Supreme Court was of the view that it was possible for the waiver to be inferred from communications between the parties and the conduct of one party to the other.

On the facts, the Supreme Court held that the parties had agreed to waive the requirement of clause 48:

The Supreme Court reached a different conclusion from both the judge and the Court of Appeal. The judge’s decision that there was a contract between the parties resulted in the contractor’s potential liability to the employer being far greater than it was prepared to undertake during negotiations between the parties. This was an “extraordinary result” which highlighted the dangers to a contractor proceeding under an expired LOI.

The Court of Appeal’s decision that there was no contract between the parties resulted in the contractor undertaking no contractual liability whatsoever to the employer – arguably, also an “extraordinary result”- which highlighted the dangers to an employer of proceeding under an expired LOI.

The Supreme Court’s finding that a contract had come into being that incorporated the MF/1 terms accords with the sensible view that it would be almost inconceivable that the parties would have entered into an agreement for the performance of the whole project which was not based on detailed terms. However, parties need to be aware that acting as if the terms are agreed may led the court to conclude that contract terms are agreed, even if there is a requirement that the contract be signed and counterparts exchanged before the contract comes into effect.

If employers and contractors wish to preserve the term “subject to written contract” then they must ensure that no inference from either their conduct or communications can be drawn to waive such a requirement.

This decision highlights the importance of ensuring that parties’ reach agreement on contractual terms before commencing work, where possible, and the basis on which work is to continue after the expiry of a letter of intent.