Home NBA News Mahmoud, Bello, Okowa, Others to be Honoured at the Justice Summit 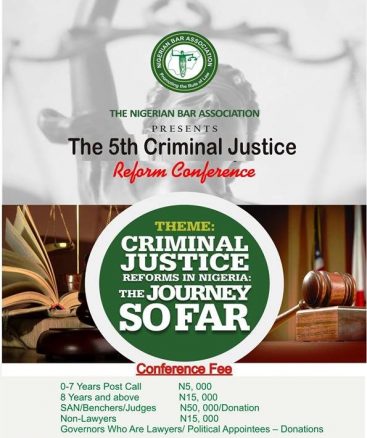 The Nigerian Bar Association NBA) Criminal Justice Reform Committee has unveiled plans to honour leading jurists and other stakeholders, who have distinguished themselves in promoting criminal justice reform in Nigeria.

Also to be bestowed with the awards are Delta State Governor, Dr. Ifeanyi Okowa, MacArthur Foundation as well as the Yar’Adua Foundation for their support to criminal justice reform initiatives in the country. Delta State is hosting the criminal justice reform conference for an unprecedented second time. The state is also hosting the dinner for conferees. The dinner/awards will draw the curtains on the conference scheduled to hold at the Asaba Convention Centre between April 24 and 27, 2018.

The theme is: Criminal justice reforms in Nigeria: The journey so far. Vice President Yemi Osinbajo (SAN) is expected to deliver the keynote address, while leading jurist and former Director-General of the Nigerian Institute of Advanced Legal Studies (NIALS), Prof. Epiphany Azinge (SAN) will deliver the dinner speech.

Other dignitaries expected at the ICLE-certified conference are Senate President Dr. Bukola Saraki; House of Representatives Speaker, Mr. Yakubu Dogara, and Attorney-General of the Federation, Mr. Abubakar Malami (SAN), among other jurists.

The criminal justice committee had unveiled the official website (https://www.nba-cjrc.org) for the conference. The portal incorporates a payment platform for potential conferees to register.

Senior Advocates of Nigeria (SANs), Benchers and Judges will register with N50, 000.

Who would Man the NBA Secretariat? – Stealing Glances at the...