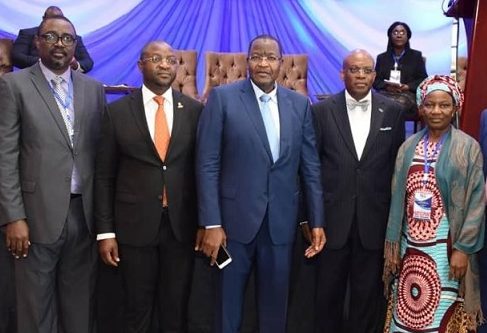 Telecom lawyer, Mr. Paul Usoro, SAN, has challenged the nation’s telecom regulator, the Nigerian Communications Commission, NCC, to stamp its authority to ensure double taxation and multiple regulation of the telecom industry are mitigated if not totally abolished.

Usoro said these two unfortunate developments have been responsible for slow infrastructure roll-out and the attendant poor quality of service that comes with it.

He said time will come when the devastating effects of all these would no longer allow operators to function properly and the whole industry may collapse as a result.

Usoro, who spoke on the Legal Framework for Telecommunications Infrastructure Roll-out at an NCC stakeholders’ meeting in Abuja recently, said that taxation in Nigeria is statutory, and any tax liable to be paid by an individual or corporate entity must be authorised and governed by a written statute but unfortunately, some of the taxes operators are made to pay, do not meet that legal requirement.

“Taxation in Nigeria is statutory, and any tax liable to be paid by an individual or corporate entity must be authorised and governed by a written statute,” he said.

He listed other factors also contributing to slow roll-out of infrastructure to include, lack of requisite investment and funding for massive roll-out; land tenure system and procurement of Governor’s consent; lack of adequate security of the infrastructure exemplified by vandalism and theft; disruption by communities; destruction during other infrastructural developments, especially engineering constructions.

For him, these levies arguably are only different in names, but not in substance and therefore should be harmonised.

Meanwhile, the commis-sion says it has set up a broadband implementation committee to hasten deployment of network infrastructure across the country.

The Executive Vice-Chairman of the Commission, Prof. Umar Danbatta, explained that the new committee will focus on ensuring deployment of the necessary infrastructure needed to raise broadband penetration for attainment of the 30 per cent target by end of 2018.

He also expressed the commitment of the Commission to support states in driving Universal Access to citizens in the unserved and underserved areas to universal affordability, accessibility and availability of service throughout the country, and described it as a critical component of NCC’s Strategic Management Plan and eight-point Agenda.

Earlier in his welcome address, the Executive Commissioner, Stakeholder Management, NCC, Mr Sunday Dare, said the service providers had been finding it more and more difficult to meet prescribed roll-out and quality of service benchmarks because the telecoms infrastructure became more ubiquitous over the years.

“NCC carefully studied the issues and realised that the national network was not functioning at optimal levels due to a number of factors such as frequent interruptions, security of infrastructure, power issues, high cost of approvals and slow permitting processes.

“We therefore developed an engagement template to deal with those factors that were understandably not within the control of the operators.

“We approached the Governors of the 36 states of the federation and the FCT through the National Economic Council for their assistance, and in 2013, they agreed on basic principles to create a more enabling environment for the speedy deployment of new telecoms infrastructure and seamless operation of existing ones.

“The 2013 framework is now being reviewed to address obvious gaps and to accommodate new developments, especially to achieve deeper broadband penetration and more efficient services,” he added. PUNUKA Attorneys’ Webinar: ‘Guaranteeing the Integrity of Court Records, Information in the Aftermath of Fire Damage to Courthouses’ [Register]

Join The Lagos Multi-Door Courthouse Webinar in Preparation for the 1st...