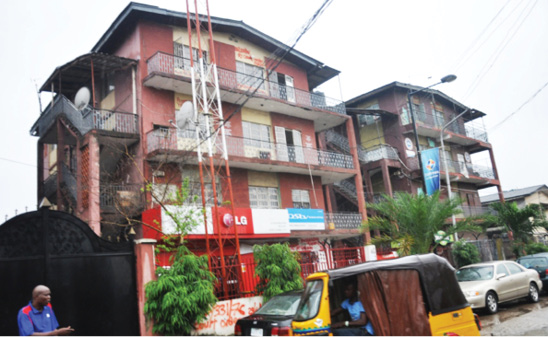 Justice Harrison has identified the twin three-storey buildings on Palm Avenue, Mushin directly opposite the Mushin Local Government Council Secretariat, containing 14 flats, a warehouse, offices and shops as the most litigated property in Lagos State.

Justice Harrison is about the 24th judge that is sitting on the case which is already on its way again to the Court of Appeal, having gone up to the Supreme Court and back.

Daily Trust investigation shows that no fewer than 24 justices and judges have so far sat on the case which was instituted in 1976 with suit No. ID/331/ 76 at the Lagos High Court, Ikeja.

A breakdown of the figure shows that apart from the 10 high court judges that sat on the matter, six justices of the Court of Appeal, Lagos Division and seven justices of the Supreme Court finally decided the case as far back as April 16, 1996 which allowed the appeal filed by the owner of the property – late Frederick Oluyole Bamgboye.

After the apex court’s 1996 decision was executed in 2003, the judgment debtor went back with the aid of thugs and policemen led by one Adetunji Adebimpe and took possession of the property. The judgment creditor again went back to court and got order for possession, (based on the subsisting apex court judgment) which was again executed on March 6, 2015.

The court sheriff spray-painted the court order number and date of eviction on various parts of the building. Which reads: “ID/331/76 POSSESSION TAKEN TODAY 23/06/15 BY COURT ORDER.

Based on this development, the Isiba family sued the judgment creditors – Bamgboye family before the Lagos High Court in a bid to re-litigate the case, but Justice Adefowope-Okojie now of the Court of Appeal re-affirmed the apex court verdict and threw out the case because it had been finally settled by the SC and ordered Isiba to pay N100, 000.

The case however took a dramatic turn when a Lagos based lawyer – Mr. Aina Chanbang was said to have concealed the names of the judgment creditors so as to grab the property.

The lawyer- the Olu of Agege, Oba Kamali Oyedeji Isiba, his brother Tubosun Isiba and one Ligali Isiba, had approached the court through their lawyer, Mr. Ania Callastus Chanbang and concealed the true names of the persons they were suing (as persons unknown) even though they knew the true identity of the property owners.

Justice Harrison ruled in a 16-page judgment, delivered on Monday 15, January this year that “The Court agrees that this amounts to fraudulent concealment”.

Harrison, who had earlier given the monarch possession of the property, having discovered that the monarch and his lawyer fraudulently concealed the true names in their bid to obtain the court order, made a U-turn and wasted no time before setting aside her earlier judgment.

“The said order shall be set aside conditionally and rent shall be collected by official receiver of the High Court of Lagos State pending the final determination of the suit”, Justice Harrison said.

The court mentioned that this is the third time the monarch and members of his family attempted to grab the land since 1996 when the Supreme Court delivered final judgment on the property and on each occasion, it took the order of court to sack the monarch from the property.

The Isibas, it was gathered have lost several cases in the Lagos High Court in the past over the same property, which judgments they refused to respect until they finally took over the property recently with a default judgment obtained against “persons unknown” while judgment in the subject matter of the case was still pending before Justice Cybil Nwaka, another Lagos State High Court judge.