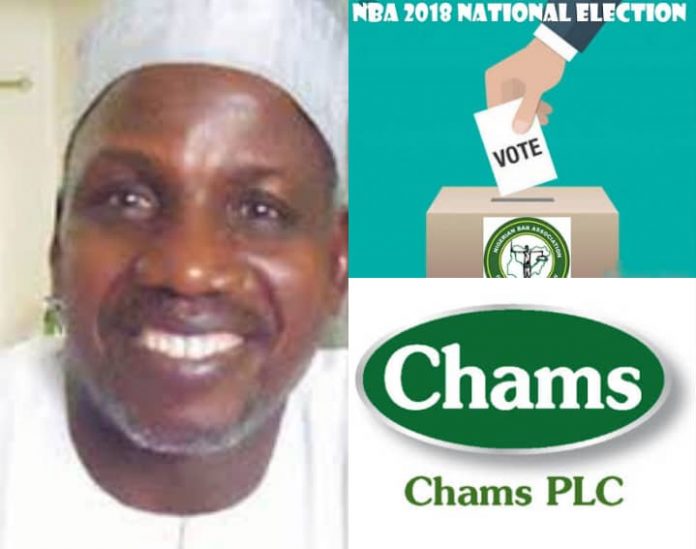 The camp of Arthur Obi-Okafor SAN has kicked against the use of Chams Plc. as vendors for the upcoming election. Their reaction followed an online publication by City Lawyer which queried the boardroom relationship between one of the NBA Presidential aspirants Mr. Paul Usoro and the CEO of Chams Plc Dr. (Mrs.) Ajoritsedere Josephine Awosika.

Following the above revelation, Che Oyinatunba a public commentator and strong supporter of Chief Arthur Obi Okafor SAN wrote an addendum to the above publication on his online platform “The Periscope”  under the heading NBA 2018 e-Election; Paul Usoro Beyond Chams Connections” asking the NBA to disqualify Chams as the vendor to the election. Che’s publication in this regard reads in part:

Mr. Paul Usoro SAN and Dr. (Mrs.) Ajoritsedere Josephine Awosika are currently non-Executive Directors of Access Bank Plc. Awosika is the pioneer female Chairman of CHAMS. While Awosika was appointed a Director of Access Bank since April 2013, Usoro joined the board a year later in January 2014. NBA’s National Bank Account, was changed from GTB to Access Bank. All local branches we’re commandeered to open Access Bank Account. What has Access Bank given to NBA in return or is NBA willing to give Usoro in return for whatever Access Bank had given to NBA under Alegeh’s administration?

Last year’s conference, to activate your Tablet, you had to subscribe to Airtel and Usoro too, has interest in Airtel. This year, without NEC approval, Chams was chosen to conduct the e-voting. With Russia hacking into USA’s election, I strongly believe that Chams, is not too secured that it cannot be hacked, assuming they did not build in an App that will multiply or reduce a candidate’s vote. This relationship between Usoro and Cham’s Chairman, is too close for comfort for any man on the street to believe that Chams wouldn’t be compromised to deliver their madam’s friend.

If I were Chams, I will disqualify myself from this process. If I were NBA that had been accused by a disqualified presidential candidate, I will shun anything that will be perceived to prove Afam Osigwe’s accusations against Mr Abdulrasheed Muritala Popularly known as Murray wrong. Murray, is A.B.Mahmoud’s appointed Chief of staff, who commanded NBA staff to use NBA platform during November 2017 NEC Meeting, to share Paul Usoro’s branded biro, note pads and other subtle campaign materials). Read in full here

Another leader in Arthur-Obi’s camp and respected Bar Leader Mr.  Jibrin Okutepa SAN has also faulted the use of Chams by the ECNBA saying NBA as a professional Association of noble men and women must be careful not to conduct its elections in circumstances that will create doubts in the minds of the right thinking members of the society.

Here is what he wrote:

…I was the one that cited foreign authorities to support the views that that company cannot be allowed to conduct the election. This is what I said and I stand by it.   NBA as a professional Association of noble men and women must be careful not to conduct its elections in circumstances that will create doubts in the minds of the right thinking members of the society. The news that one of the candidates in the forthcoming elections has connections with persons or group of persons providing ICT services in the elections must not be treated with levity and Nigerian style. The news making round is that one of the candidates in the elections led the service provider to NBA in 2010 and introduced them to NBA. This should worry any right thinking members of the Bar. As if that is not enough this candidate is sitting on the same Board of Access Bank Plc with the Chairman of ICT company that is to conduct the 2018 NBA elections. Justice is rooted in confidence. The reason Grace Infotech Ltd was not selected as information had it is because of the pending litigation in respect of the election it conducted for NBA in 2016. Can NBA afford another litigation arising from the 2018 elections? Bar leaders must do something to save NBA from the embarrassment this will cause the profession. Why did ECNBA engage Charms Plc to conduct the 2018 elections for NBA when it is clear that one of the candidates in the presidential race is sitting on the board of Access Bank Plc with the Chairman of the company that is to provide the ICT services in the elections? How fair can that be? Why do we blame politicians when as professional Association we are not behaving better? It is high time NBA and it’s leadership engender the confidence of Nigerians by avoiding act or omission that tends to suggest that NBA has an agenda that seems to be less than transparent.

Hon Justice R A Amaize Rtd of the High Court of Edo State said in agreeing with my above post that: I agree. It only shows the level to which the nation has degenerated and is irretrievably sinking, heading for the brinks. It is very sad that falsehood now leads the truth, even as honesty has also yielded place to fraud and dishonesty in our clime, with the result that honest persons are seen as pariahs and are scorned. Pity indeed. The principle that those who have duty to decide must not give appearance of bias is of considerable antiquity. In R vs Sussex Justices, Ex parte McCarthy ([1924] 1 KB 256, [1923] All ER Rep 233) is a leading English case on the impartiality  and recusal of  judges. It is famous for its precedence in establishing the principle that the mere appearance of bias is sufficient to overturn a decision. It also brought into common parlance the oft-quoted aphorism “Not only must Justice be done; it must also be seen to be done.”

This authority is notorious for the principle that in any setting where an impartial decision is expected those saddled with the duty to produce the result must not give appearance of bias. Justice demands that they live above board. Any appearance of bias destroys the confidence of the people. There is a need to state the facts of this case for us to appreciate the importance of the points I am making here.

In 1923 McCarthy, a motorcyclist, was involved in a road accident which resulted in his prosecution before a magistrate court for dangerous driving. Unknown to the defendant and his solicitor, the clerk to the justices was a member of the firm of solicitors acting in a civil claim against the defendant arising out of the accident that had given rise to the prosecution. The clerk retired with the justices, who returned to convict the defendant.

On learning of the clerk’s provenance, the defendant applied to have the conviction quashed. The justices swore affidavits stating that they had reached their decision to convict the defendant without consulting their clerk.

The appeal was essentially one of judicial review and was heard at the King’s Benchdivision by Lord Chief Justice Hewart. In a landmark and far-reaching judgement, Lord Hewart CJ said:

“It is said, and, no doubt, truly, that when that gentleman retired in the usual way with the justices, taking with him the notes of the evidence in case the justices might desire to consult him, the justices came to a conclusion without consulting him, and that he scrupulously abstained from referring to the case in any way. But while that is so, a long line of cases shows that it is not merely of some importance but is of fundamental importance that justice should not only be done, but should manifestly and undoubtedly be seen to be done.

The question therefore is not whether in this case the deputy clerk made any observation or offered any criticism which he might not properly have made or offered; the question is whether he was so related to the case in its civil aspect as to be unfit to act as clerk to the justices in the criminal matter. The answer to that question depends not upon what actually was done but upon what might appear to be done.

Nothing is to be done which creates even a suspicion that there has been an improper interference with the course of justice. Speaking for myself, I accept the statements contained in the justices’ affidavit, but they show very clearly that the deputy clerk was connected with the case in a capacity which made it right that he should scrupulously abstain from referring to the matter in any way, although he retired with the justices; in other words, his one position was such that he could not, if he had been required to do so, discharge the duties which his other position involved. His twofold position was a manifest contradiction.

In those circumstances I am satisfied that this conviction must be quashed, unless it can be shown that the applicant or his solicitor was aware of the point that might be taken, refrained from taking it, and took his chance of an acquittal on the facts, and then, on a conviction being recorded, decided to take the point. On the facts I am satisfied that there has been no waiver of the irregularity, and, that being so, the rule must be made absolute and the conviction quashed.

The ruling is derived from the principle of natural justice and has been followed throughout the world in countries that use the English legal system. It has been applied in many diverse situations, including immigration cases, professional disciplinary cases, domestic tribunals such as members’ clubs, and perhaps most famously in the Pinochet case where the House of Lords overturned its own decision on the grounds of Lord Hoffman’s conflict of interest.  It is my view and I so submit that let the right thing be done and heaven will not fall. Let me add that NBA as the foremost civil society organization cannot allow its elections to be marred by suspicious. It’s voice to fight for free and fair elections in Nigeria will be lost if it’s election are conducted in circumstances that show that it was done in suspicious circumstances as in this case. As you rightly pointed out nothing has been demonstrated.

We reached out to both Paul Usoro SAN and Prof. Ernest Ojukwu SAN to get their reactions on the Chams gate. At the time of publishing this, they have not responded.

Who would Man the NBA Secretariat? – Stealing Glances at the...