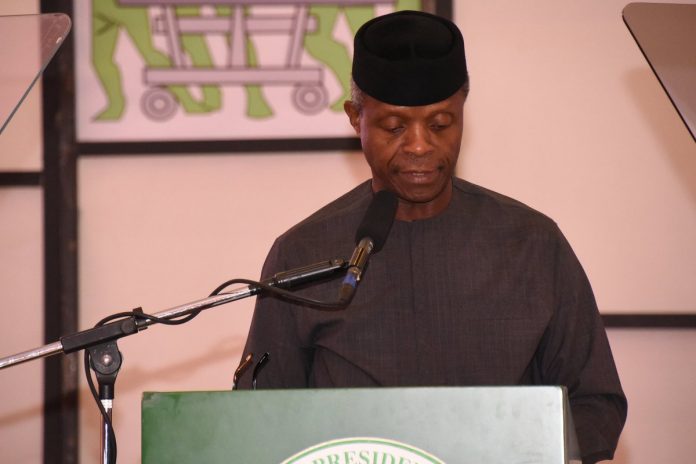 The Federal Government is putting the sum of N500 billion into wealth creation and poverty alleviation, Vice-President, Prof. Yemi Osinbajo, has said.

Osinbajo featured at the question and answer session of the 58th Annual General Conference of the Nigerian Bar Association (NBA) on Tuesday at the International Conference Centre, Abuja.

The theme of with the theme of the four-day conference is “Transition, Transformation and Sustainable Institutions.”

He said that it was in recognition of the menace of poverty that the Federal Government rolled out the National Social Investment Programmes (NSIP) aimed at improving capacity and alleviating poverty.

“We started off in 2016 looking at a budget that was crafted differently; all along if you look at the way we have approached economic policies, it has always been the case of top-down approach.

“The approach we adopted in 2016 was first to create to create a safety net; so we, for the first time, we put in the budget a line for is called NSIP; that is N500 billion for NSIP and that is the largest of its kind in the history of the country.

“The N500 billion covers conditional cash transfer to the poorest; one million of the poorest; we work with the World Bank for special coverage to determine the beneficiaries.’’

He said that the Federal Government targeted 5 million poor people but was hindered by scare resources.

The vice-president said that 500,000 graduates had been employed under the N-Power which was a part of NSIP for providing jobs to graduates.

He also listed TraderMoni scheme which was a micro-credit scheme aimed at the empowering 2 million petty traders.

According to Osinbajo, one way of checking poverty is to incrementally improve capacity and put money in the hands of the poorest which is what NSIP is doing.

Osinbajo, who is a Senior Advocate of Nigeria (SAN), said that there was need for strong institutions in order to make justice system effective.

“There is a sense in which we must accept responsibility for the discipline of lawyers; dialectics is part of our system; so, I think it is beyond government.

“Strong institutions such as the NBA needs to rise to the occasion and it really calls for self-regulation; government is not going to make the laws to change that,’’ he said.

He said that the stakeholder should not allow a situation where the administration of justice system became ineffective because if it did, building a moral society would be undermined almost entirely.

Earlier in his remark, the Outgoing NBA President, Abubakar Mahmoud, described Osinbajo as a pillar of support to the association.

He said that the vice-president had been exemplary, adding that the NBA was proud of him.