Home NBA News NBA Believes in the Rule of Law and Its Practical Enforcement –... 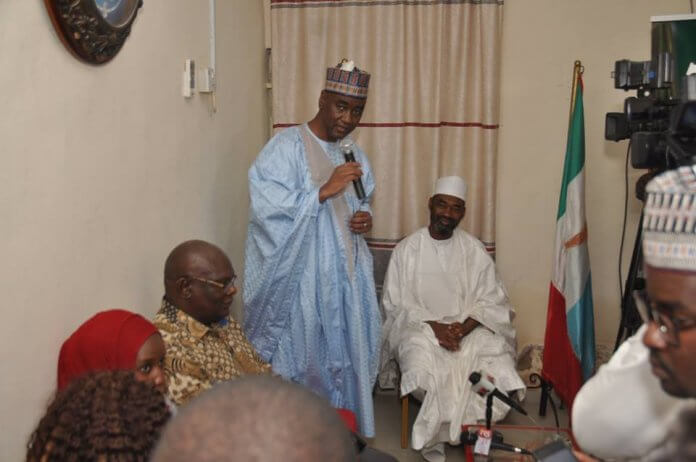 The President of the Nigerian Bar Association (NBA) A. B. Mahmoud OON, SAN has said that the NBA believes strongly in promoting the rule of law and particularly the practical enforcement of the tenets of the administration of criminal justice protocol.

Mr. Mahmoud said this while declaring the one Day Town Hall Meeting between the NBA and stakeholders on the State of Insecurity/Banditry in Zamfara State.

Mr. Mahmoud who assured delegates of the neutrality of the Bar Association added  that whoever needs to be blamed, the Bar Association will not shy in pointing those blame, and calling whoever is involved to order. He also used the opportunity to remind everybody, stakeholders, political leaders and all those in authority that mechanisms exist under domestic and international law to hold people accountable for their actions and bring those who are responsible for breakdown of law and order to justice.

The President who arrived Gusau Zamfara State a day before the Town hall meeting in company of other senior members of the Bar first paid a courtesy visit to the Deputy Governor of the State, His Excellency Mallam Ibrahim Wakkala Muhammed at his residence.

Speaking during his courtesy visit to the State House, A. B. Mahmoud stated that the purpose of the visit was to express solidarity with the people of Zamfara State who have suffered from high levels violence for so long, engage with leaders and communities in Zamfara State to seek a better understanding of what is happening and to explore avenues for ending the violence and bringing peace back to the State.

He stated that the bar association is determined to contribute in search of lasting peace solution in the disturbing development in Zamfara State.

In his remarks, the Deputy Governor of Zamfara State; His Excellency Ibrahim Wakkala Muhammed thanked the NBA delegation for finding time to come to Zamfara. He expressed his optimism that the Town Hall meeting will afford the delegation the opportunity to have a better appreciation of the happenings in Zamfara State.