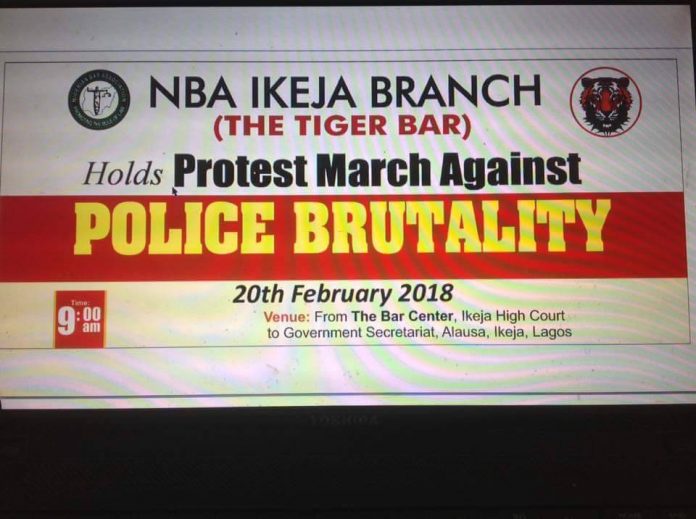 The Nigerian Bar Association, (NBA) Ikeja Branch has announced plan to hold an all-inclusive protest march against the various abuse of powers by the Nigeria Police on Tuesday, 20th February, 2018.

The decision was taken at an emergency meeting held by the Branch today to discuss the report of the Committee set up to investigate Police brutality against one of their members Adeyemi Abijo Esq.

According to the Chairman of the Branch, Mr. Adesina Ogulana;

“TIGER BAR to hold a press conference on Thursday 15 Feb 2018 at her Secretariat on ABUSE OF POWERS BY THE NIGERIA POLICE and to stage an all inclusive protest march on the same subject matter on Tuesday 20 Feb 2018 . These are part of the key decisions taken today at the emergency meeting of the Tiger Bar today to entertain the report of the ADEJARE KEMBI COMMITTEE ON POLICE BRUTALITY AGAINST ADEYEMI ABIJO ESQ, a Tiger..”

The planned protest is coming on the heels of unwarranted and unprovoked cases of Police brutality against  lawyers. The assault on Adeyemi Abijo Esq. became the height of the unreasonable attack on lawyers by the police. Mr. Abijo was recently bitten, handcuffed like a criminal by men of the Nigerian Police for  attempting to intervene against Police unjust harassment of an innocent citizen.

It is expected that lawyers in and outside the branch would join in the protest.