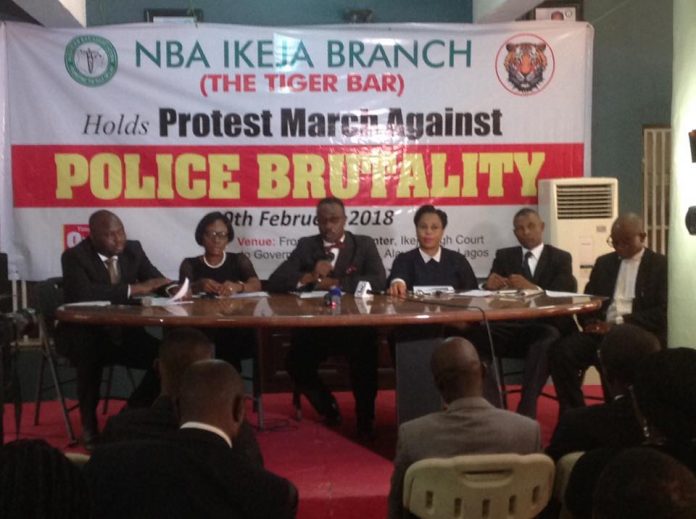 The Nigeria Bar Association (NBA) Ikeja branch has scheduled a march against brutality and extrajudicial activities being carried out by officials of the Nigeria Police Force in the country.

Making this known to the public, Chairman of Ikeja Branch of NBA, Adesina Ogunlana, said that the police has for a long time been acting as a force whose officials are above the law. He stated that the protest became important after receiving the report of a committee set up to look into the assault and harassment of one of its members, Barrister Fatai Adeyemi Abijo.

He slammed the police force for being unprofessional in carrying out their duties and that has been shown on several occasions as Nigerians are being battered, ridiculed and treated as animals.

He complained, “To the average Nigerian, the Nigeria police is an arch-enemy, a horror, a nightmare, an evil, an affliction, a malady, a curse, an epitome of wickedness, a disaster, a complete abomination and an organization of calamity.”

“The police in the performance of their jobs are for most times, rude, crude, unreasonable, abusive, malicious, mean, unjust, dishonest, extortionate, compulsively lips, rapacious, violence and barbaric leading to the routine maiming, killing, humiliation and extortion of innocent citizens of Nigeria,” he added.

Barrister Adesina expressed that political will is lacking on the part of the leadership of Nigeria government to see that an organ of government that is so vital like the police will respect the people of Nigeria.

He faulted the police on some of the illegal activities being embarked upon like changing of charges and extrajudicial killing which occur in all part of the country.

Speaking further, he lamented that Nigerians are always treated as dogs whenever they have encountered the police. He called on the people to rise up against the unprofessionalism of the police and other security agencies.

He also urged lawyers to see themselves as change agents and encourage them to stand up for the people.

“We are going to the street to collaborate with the people to ensure that this anomaly is ended. The people must not be treated as dogs, so they must reject police oppression, brutality, and irresponsibility by the Nigeria police.”

He disclosed that the protest would not be a violent one and protesters would be moving to the office of the governor of Lagos state to present a letter to the Governor and Speaker of the House of Assembly.