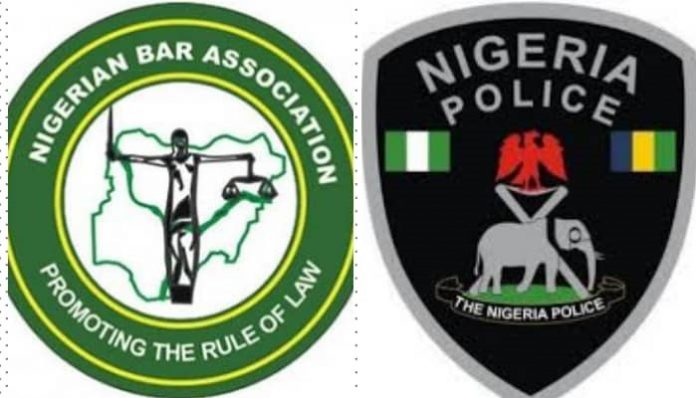 Yesterday, some policemen attached to Area M Police Command, Idimu who brutalized and detained another member of the Nigerian Bar Association (NBA), Ikeja Branch (The Tiger branch) Segun Akinloye were arrested and detained though the intervention of the leaders of the branch.

According to the Chairman of the branch, Mr. Adesina Ogunlana, the policemen were arrested by the DPO and the release of the lawyer secured.

“Yesterday afternoon, we received an urgent call yesterday afternoon from. A Tiger ( NBA IKEJA BRANCH member) about the travail of a legal practitioner ,Segun Akinloye who was brutalized , seriously injured, falsely imprisoned , detained , humiliated( chained hand to foot ) by some rampaging police men on Friday night for no just cause.”

“The matter was reported at the the IDIMU POLICE STATION, LAGOS of the AREA M of the Lagos state Police Command. Through the active intervention of the Area Commander and the D P. O CSP Ibezim, the leader and the chief thug of the police gang was arrested before we got there.”

“The D P. O was particularly polite and courteous in receiving us and promised the apprehension of the chief thugs colleagues and discipline.”

“However while hearing out our brutalized colleague and recording him, two police officers, one wielding a rifle attempted to drive us out of the police station grounds . According to them what we were doing was wrong and unacceptable.”

“Of course we strongly disagreed with them , stood our grounds and had our way.”

The Real Issues at Stake – NBA President Speaks on His...