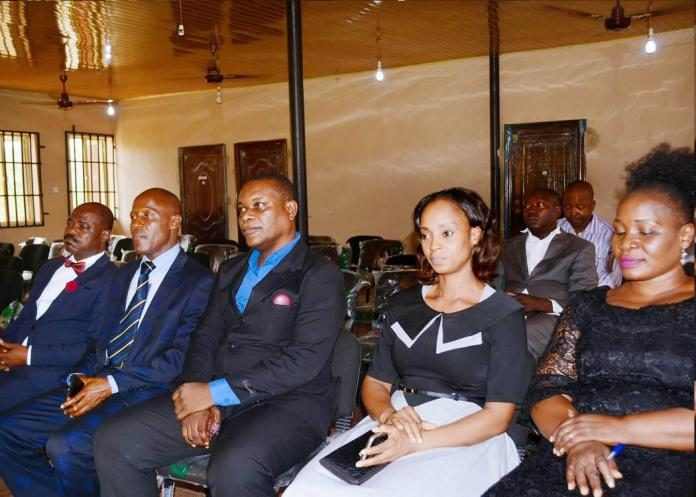 In attendance at the programme were stakeholders in the Criminal Justice System of Ogun state including officers of the Ogun State Police Command, Ogun state Chapter of the Nigerian Prison Services, law officers from the Department of Public Prosecution in the Ogun State Ministry of Justice, Criminal Defence lawyers, the Media, etc.

In her welcome address, the Vice Chairman of the NBA Abeokuta branch, Mrs Adebimpe Obienu on behalf of the Chairman NBA Abeokuta branch, Ibrahim Atanda, Esq. welcomed everyone to the event. In her remark, she appreciated the NBA under the leadership of Abubakar Balarabe Mahmoud, OON, SAN for initiating the project to see to the domestication and implementation of the ACJA 2015 across 28 states in the country.

The NBA National Welfare Secretary, Adesina Adegbite, Esq., on behalf of the NBA President, A.B. Mahmoud, OON, SAN made an opening statement. He stated that the purpose of the project was to promote the adoption and implementation of the Administration of Criminal Justice Act, 2015 in 28 States of Nigeria. He not only thanked MacArthur Foundation for their funding support, but he also emphasized the need for the proper funding of the Criminal Justice sector by the Federal and State government so as to ensure that the ACJA 2015 when domesticated in states across the nation will be properly implemented.

The National Welfare Secretary, on behalf of the NBA President, finally used the medium to call on the Governor of Ogun State to use his good office to facilitate speedy assent to the Ogun State Administration of Criminal Justice Bill which is already awaiting his assent.

To present a clear picture of the entire Project, Osita Okoro, Esq., the Programme Officer for the NBA-MacArthur Foundation project, presented a general overview of the Project. He started with a conceptual clarification of what the challenges in the Criminal Justice are, and how NBA seeks to improve the state-level adoption rates of ACJA, 2015, which is a federal legislation domesticated by few States only. Mr. Okoro stated that it was the need to find solution that led the NBA to apply to MacArthur Foundation for funding support for this project. He stated that the project theme is “promoting the domestication and implementation of ACJA Legislation across Nigeria”, and that the tenure of the Project is 3 years.

Mr Okoro went further to say that the ACJA, 2015 does not automatically apply to States, rather it must be adopted or enacted as

a State legislation through the legislative process of a State House of Assembly and finally assent by the State Governor. Hence, the NBA proposal to the McArthur Foundation to promote State domestication, enactment and implementation.

He stated that the objectives of the project included:

• To embark on state-level domestication of the ACJA 2015 with a view to ensuring uniformity in the administration of criminal justice legislation access.
• To promote the implementation of the new criminal justice regime which the ACJ represents, by building stakeholders capacity building across 28 States of Nigeria.

With regard to project activities, Mr Osita Okoro outlined the activities under the Project to include a national consultation with key stakeholders in the criminal justice sector to discuss issues affecting domestication and implementation, state-level legislative advocacy and technical support, state validation public forum with stakeholders, providing continuing legal education programme for lawyers with a view to building their capacity on criminal justice practice. This Continuing legal education programme would be delivered through an e-learning portal with courses and training materials focused on key elements of the ACJA, 2015.

The NBA-MacArthur Foundation project Programme Officer Stated that the Project shall be implemented through a National Project Management Team and then State Level Committees that will drive the speedy and smooth execution of the project at the State level. He stated that a website, which will serve as the largest digital repository for resources on Administration of criminal justice, has been designed and exclusively dedicated to the Project by the NBA. The website is: nba-acj.org.ng. Stakeholders are encouraged to visit the website as often as possible.

According to the Director of Legislative Drafting, some of the progressive elements in the draft Bill include removal of the application of consent from a judge before filing complaints, speedy trial for criminal matters from filing to judgement. The process of assigning criminal cases at the high court has been fast tracked. Other innovative provisions are as follows:

• Stay of proceedings pending appeal will no longer lead to putting on hold the continuation of a trial.
• With regard to arrest in lieu, there is a provision for punishment for any person who arrests another person in lieu of a suspect.
• A suspect shall not be arrested or detained on a mere civil wrong or breach of contract or paraded on any media before the end of trial. Where the accused upon judgement being delivered is acquitted, he shall be entitled to damages and apology from the agency involved in the publicity.
• Provision for community sentencing with respect to misdemeanours and minor offences.
• Establishment of the Ogun State Community Service and rehabilitation centre.
• The bill provides for not only Legal practitioners to prosecute but also allows the police to prosecute on behalf of the State.

Mr. Olaotan informed the meeting that the Bill had been passed by the Ogun State House of Assembly and had been transmitted to the Office of the State Governor and currently awaits the Governors Assent.

The highlight of the programme was the constitution and formal inauguration of the Ogun State NBA-MacArthur Project Committee on the domestication and implementation of ACJA 2015. In inaugurating the Committee, the NBA President represented by the National Welfare Secretary read out the Committee`s terms of reference and mandated the Committee to see to the promotion of domestication and implementation of the Administration of Criminal Justice Act, 2015 in Ogun state in line with the NBA-MacArthur project objectives.

The members of the committee are:

The committee is to be assisted by the following persons:

Mr Adegbite upon inauguration of the committee encouraged them to be dedicated to the project.

In their acceptance speeches after the inauguration, members of the committee expressed their pleasure and appreciation for their appointment as members of the committee. They assured the National leadership of the NBA of their unflinching commitment and support. They stated unequivocally that they will assist the NBA to achieve the set objectives of the Project and their terms of reference.

In conclusion, Zainab Animashaun (Ms), who is the Policy and Strategy Adviser to the NBA President and also the Compliance Officer of the NBA-MacArthur Project, delivered the vote of thanks. She profusely thanked and appreciated all the participants who attended the meeting and thanked the Project Committee members for honouring the NBA and accepting to serve. She also stated that the committee led by NBA National Officers and members of the project team shall be embarking on a Legislative Advocacy visit to the Attorney-General of Ogun State, Chief Judge of Ogun State and other stakeholders in the state to advocate for the assent and implementation of the Ogun State Administration of Criminal Justice bill.

The NBA will be holding a state validation public forum on the Ogun State Administration of Criminal Justice Bill sometime in February 2018.