The Chairman of the Planning Committee of the 2018 Nigerian Bar Association (NBA) Lagos Branch Law Week, Mr. Tola Oshobi SAN has said the Premier Branch will witness a shift from the usual activities that characterized past law weeks in the 2018 Lagos NBA Law Week scheduled to hold between Saturday, 5th and Friday 11th May, 2018 . 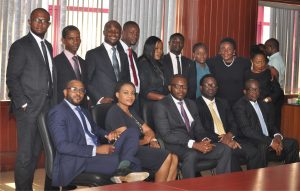 Mr. Oshobi SAN stated this at a media parley held during the week at the conference room of Babalakin & Co, Chambers, Victoria Island, Lagos. He revealed that this year’s Law week is planned to ensure an all-inclusive participation by members of the Branch and promises to bring new ideas and innovation that would excite members throughout the week long event.

Speaking further, the Learned Silk assured that the organizers of the event have selected both local and international members of Faculty to address topics that would underscore the theme for the 2018 Law week which is ‘Human Capital and the Legal Profession in the 21st Century,’

The activities for the law week according to Mr. Oshobi SAN are highlighted below:

The Law week will kick off with a ‘Health Walk’ and an aerobic session. Take off for the health Walk will be the premises of the Lagos High Court, Igbosere and terminal point would be Falomo Round-about in Ikoyi Lagos. The health walk replaces the age long football match used to herald the law week in the past. This is to ensure that all members participate in the sporting activities. Mr. Oshobi also underscored the need for members to take seriously, issues relating to their health.

Members of the branch would visit the Ikoyi and Kirikiri prisons in Lagos simultaneously with gifts and essentials items for the inmates. The branch has also organized a mini Legal Clinic which would afford the branch an opportunity to identify how best to make representations to the government and the prison authorities on behalf of the inmates.

The planning committee have also engaged seasoned doctors to conduct routine health check for members of the branch. This is to hold at the Foyer of the High Court. The learned silk urges members to ensure that they take advantage of this period to check their vitals.

There is also an arrangement with the Nigerian Identity Management Commission to conduct the National Identity Card registration exercise for members of the Branch throughout the week. This also will hold at the Foyer of the High Court.

Also coming up on the 9th  of May is the  Law Week Welcome Cocktail which is scheduled to also hold at the Foyer.

The technical sessions which the Learned Silk hinted is the core of the law week is scheduled to hold on the 10th and 11th of May. The sessions promises to feature both local and international faculty comprising distinguished Judges, lawyers, academics and successful professionals from other fields. A distinguished member of the profession and active member of the Lagos branch, Prof. Konyinsola Ajayi, SAN will set the tone for the law week technical sessions with a keynote address. This would be followed by the sessions.

There would be a minimum of three sessions on Thursday; the topic for the first session is “Client Expectations in the 21stCentury” to be handled by a seasoned and accomplished in-house counsel who would be educating members on the expectations of corporate organizations from the perceptive of an in-house counsel.  The second session is on the topic: “Technology & Innovation” This would be handled by a rich panel of experts in the field of technological innovation. The third session is dedicated to the Young Lawyers of the Branch and is on the topic; “The 21st Century Young Lawyer”

There is a tentative session which will seek to give Lagos State an opportunity to address lawyers on certain critical areas that are relevant to lawyers and the members of the public who form lawyers’ major clientele.  Issues such as taxation, land use charge, land registration in Lagos state and other areas where lawyers interface with Government would be addressed. Mr. Oshobi assured that discussion with Lagos Government on their participation is receiving positive response.

The day’s Programme will climax with a new introduction which is tagged the  “Elders’ Night.”  This is a night set aside by the Branch to celebrate and appreciate older members of the bar who have by their services and sacrifices contributed to the growth of the branch.

The activities for the day will begin with a session titled “Dialogue with the Judges on Labour Issues”.  This will address issues such as the amendment of the 1999 Constitution to give the NIC exclusive jurisdiction on labour issues as well as the recent Supreme Court decision on appeals emanating from the NIC. Judges of the National Industrial Court would be on ground to respond to issues relating to these and many more. The choice of the NIC according to the Chairman is provoked by the fact that labour related issues which  form an integral part of the everyday activities of both the lawyer and the client are issued that have received little or no attention.

“The Rainmaker Lawyer”  Is an interesting session  which is aimed at reminding lawyers that the profession is also a business that should generate sources of livelihood. This session will be handled by successful lawyers who have built institutions and successful legal practice. They will speak to lawyers on how to maximize their potentials as lawyers in the context of law as a business.

Again to underscore the importance of health, this session on “Health Work and Life Balance” will emphasis the importance of balancing work and health in the legal environment. Two top Medical doctors would handle this session. Also on this session there would be lawyers who have made it a passion to create environment where the lawyers are supported to maintain balance in their work and health. They will be advising lawyers and law firm on how to achieve this by telling them how they do it.

Again the usual formal Law Dinner would be replaced by a very informal “Closing Party” which would allow for wider participation by all members of the bar. The closing party would be an African Themed party that is aimed at encouraging lawyers to dress in traditional attires to showcase our rich culture. Top entertainers are expected to grace the party which promises to be fun. The party would wrap up the 2018 Lagos Law Week.

Speaking while fielding questions from Journalists, the Learned silk also assured that the Chief Judge of Lagos state has been approached to ensure that court activities are shelved for a few days to enable lawyers participate actively. He also assured that Law Week fees were highly reduced for this same purpose.

On carrying the younger branches along, Chairman of the Lagos NBA branch Mr. Chukwuka Ikwuazom assured that it is the priority of the branch to ensure that members of  Epe and Ikorodu branches who indicate interest would be given slots to attend and participate at the Law Week