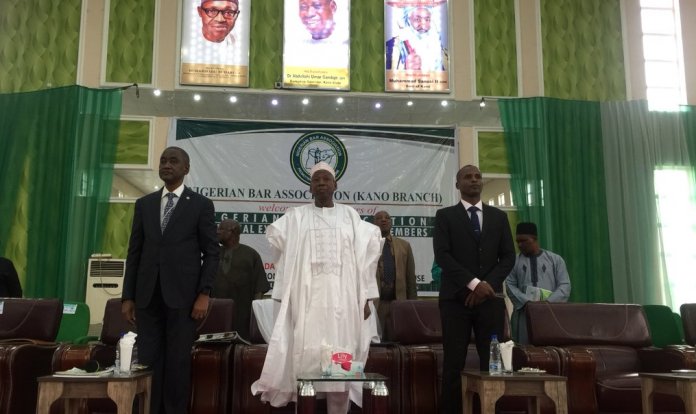 President of the Nigerian Bar Association Mr. AB Mahmoud SAN has said the major set back to the progress of National Development in the present administration is the lack of work synergy among agencies of government.

Mr. Mahmoud was speaking on the Nation’s Public Safety and Security, at the recently concluded National Executive Council Meeting (NEC) of the Nigerian Bar Association (NBA) held at the ancient city of Kano.

“Your Excellency, my Lords, distinguished colleagues; I have in the past drawn attention to poor quality of governance even at the Federal level.”

“I have called attention to seeming dissonance amongst various institutions. How, many critical institutions seem to be working at cross-purposes.”

“This trend has in our view not improved significantly. We still do not observe the much-desired synergy within the administration. Many decisions are unnecessarily delayed to the detriment of national interest.”

“It is a matter of grave concern to us that almost six months into the financial year, the 2018 national budget is yet to be passed due to disagreement largely between national assembly and the executive. Similarly many critical departments and agencies of government remain without their statutory heads or boards either because government is slow or unable to act or because of disagreement between the executive and legislative branches of government.”

“The Securities and Exchange Commission for instance has been without a board for most of the life of this administration and now without a substantive head for several months since the interdiction of the former Director General.” The President stated.

He further noted that this state of affairs is eroding confidence in the Nigeria’s capital market with huge negative consequence on the national economy and is therefore unacceptable.

How to Smoothen the Relationship Between the Bar and Law Enforcement...